Throughout American history the ‘Price of Patriotism’ has been gargantuan and required incredible commitment and resolve to maintain.  There are those today who suggest that conservative ideological beliefs, traditional family values, morality, and the U.S. Constitution are ‘outdated’ beliefs from a bygone era to be dismissed as things of antiquity.  They laugh at what those of us who hold those values would consider ‘patriotism’ and consider us ‘domestic terrorist’ to be treated as common criminals and silenced. 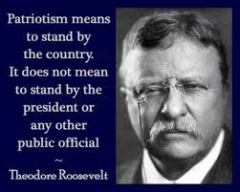 During the time the colonies were contemplating whether to ‘fight’ for Independence or remain subservient to the British Crown, American Patriotism was a costly position for one to adopt.  It cost more than most of us could possibly calculate in terms of money, social standing, political standing, and physical safety.  We find in studying history that a significant number of those who adopted the stance of ‘American Patriotism” lost position, property, family, and at times, life itself.  Yet those who treasured Freedom considered it a price worth paying to secure Liberty for those living at that time and posterity.  They considered it unacceptable to live in servitude to tyranny and although they looked for ways to compromise and reconcile with the Crown, they could find none that would not leave them servile so they opted to take the only steps available in an attempt to secure Independence, Liberty, and Freedom.

Thomas Paine said, “These are times that try men’s souls.  The summer soldier and the sunshine patriot will, in this crisis, shrink from the service of their country; but he that stands it now, deserves the love and thanks of man and woman. Tyranny, like hell, is not easily conquered; yet we have this consolation with us, that the harder the conflict, the more glorious the triumph.  What we obtain too cheap, we esteem too lightly.  Heaven knows how to put a proper price upon its goods; and it would be strange indeed, if so celestial an article as Freedom should not be highly rated.”  He also said, “Those who expect to reap the blessings of freedom must, like men, undergo the fatigue of supporting it.”  Patrick Henry in his infamous declaration said, “Is life so dear, or peace so sweet, as to be purchased at the price of chains and slavery?  Forbid it, Almighty God!  I know not what course others may take; but as for me, give me liberty, or give me death!”

Dr. Walter Williams said, “The framers gave us the Second Amendment not so we could go deer or duck hunting but to give us a modicum of protection against congressional tyranny.”  Robert A. Heinlein said, “Love your country, but never trust its government.”  Jacob G. Hornberger said, “Of course, the proponents of political tyranny are usually well-motivated. Those who enacted the gun-registration law in California point to criminals who have used semiautomatic weapons to commit horrible, murderous acts.  But the illusion – the pipe dream – is that bad acts can be prevented by deprivation of liberty.  They cannot be!  Life is always insecure.  The only choice is between liberty and insecurity, on the one hand, and insecurity and enslavement on the other.  The true patriot scrutinizes the actions of his own government with unceasing vigilance.  And when his government violates the morality and rightness associated with principles of individual freedom and private property, he immediately rises in opposition to his government.  This is why the gun owners in California might ultimately go down in history as among the greatest and most courageous patriots of our time.”  Thomas Jefferson said, “The patriot volunteer, fighting for country and his rights, makes the most reliable soldier on earth.”  Dr. Martin Luther King, Jr. said, “He who passively accepts evil is as much involved in it as he who helps to perpetuate it.” 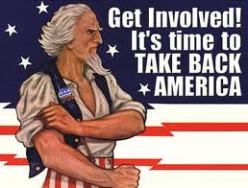 Men from every era, ethnic background, social strata, and political stripe have at one time or another, in our history, demonstrated an understanding of the value of our unalienable God-given rights that were enumerated in the Constitution by our Founding Fathers.  A document that begins “WE THE PEOPLE….”  A document that identifies ‘Unalienable Rights’ and establishes means to hold tyrannical overreaching and intrusive government in check and insists that the ultimate power and authority of America belongs to the citizens thereof.  Today, we have a government that does not believe that!  We have a President that has gone around the World trashing this nation and people, and recently in Tanzania declared that the Tea Party and conservative Republicans who were conservative Christians, gun owners, and held to what he deemed to be antiquated ideology of morality and self-determination were a small group and fit the description of ‘domestic terrorist’.  We have never had anyone serve as President of these United States who was so distant from American values as this man.  We have never seen a time when so many, in high office, want to so radically transform our American Heritage into something that would dismiss the Constitution, invalidate our traditional moral values, and destroy the sovereignty of this nation bringing us into subservience to the United Nations or some World Governing Body.

If we have ever had a time, since the American Revolution, when there was a need for True Patriots to rise up, band together, make their voices heard and have the resolve to stand for the long haul IT IS NOW!  If we fail to unify as a voice of reason, demand and defend Liberty and Freedom we will soon have neither.  Patriots it is in your hands!  Your country is being destroyed and as Dr. King said if we see it happening and remain silent we are as guilty as those who are perpetrating it.  We must be involved.  We must be diligent in prayer.  We must be committed to obtaining and retaining Liberty and Freedom.  It is up to us.  I do not have all the answers and sometimes feel I have no answers but I know one who does and to Him I am interceding for this nation.  I want a nation in which ALL CITIZENS can have “Life, Liberty, and the Pursuit of Happiness.”  I want a nation in which ALL CITIZENS can pursue the American Dream with a real hope that it is attainable.  I want a Constitutional Democratic Republic as was originally established.