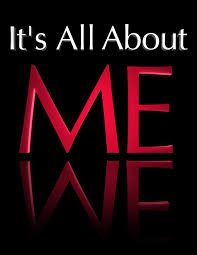 I am not referring to President Donald J. Trump but the former President Barack Hussein Obama.  The media, talking heads on television, political pundits, and many politicians have sought to make Donald Trump the “It’s all about me, president or politician.”  They seem to have incredibly short memories or they have failed to do any semblance of research and examination of the many speeches the former president has given.  They seem to be oblivious as to how many times Mr. Obama has referred to himself when he speaks.

I saw a political cartoon that pictured both Mr. Obama and Mr. Trump and suggested that when Trump speaks it is “me, me, me, me…” but when Mr. Obama speaks it is all about “you, you, you, you….”  When I saw that I laughed out loud and thought, “Surely you can’t be serious” but the cartoonist was deadly serious.  Wrong, but deadly serious!  I have seen reports from the Leftist and the MSM that suggested that Mr. Obama’s farewell speech was completely devoid of ‘self-references’ and was magnanimous and clearly focused on America and Americans.  But, then, they have doted on him treating him as some kind of god for 8 years.

In Mr. Obama’s farewell addressed he referred to himself 75 times.  This is not the first incident of his narcissism and self-focus but in this particular event he used “I” 33 times, “my” 20 times, “me” 10 times, and “I’m or “I’ve” 12 times.  If you remember or care to research, back in July he mentioned himself 45 times in a speech given, supposedly for the slain officers in Dallas.  The only thing the MSM and the Leftist seem to hear are his closing words where he encouraged Americans to TUNE IN, “because, for me, it’s always been about you.”  THAT IS HILARIOUS!  It has never been about you, me, or America it has always been about Barack Hussein Obama and his leftist agenda.  Contrast that to Mr. Trump’s Inaugural speech and you clearly see who is referring to SELF the most.  The winner is Barack Obama!

In January of 2016, Mr. Obama made a speech announcing new gun control orders.  In that speech, he referred to himself 76 times.  Following the mass shooting in Roseburg, Oregon he mentioned himself 28 times in a short 12-minute speech.  When he visited New Delhi, Barack Obama referenced himself 118 times in 18 minutes.  I cannot imagine anyone not acknowledging that he is a narcissist and if we are honest we would have to acknowledge that the most important person in Barack Obama’s world is BARACK OBAMA.

We now have a new president and hopefully, we will move toward a much more people-centered administration and a more constitutional one.  Hopefully, we will find that we have an administration that truly wants to place America First rather than seeking to ‘fundamentally transform’ her and punish America for the perceived sins of the globalist and haters of our system and freedom.  Hopefully, we will find inroads into returning government to the hands of the true owners, THE PEOPLE.  Mr. Obama has never viewed America in the same light as the founding fathers or the framers of our American constitution.  He has viewed our system of government as flawed and the constitution a hindrance rather than a document that was designed as a safeguard for our inalienable rights and liberties.

The historic record reveals that in President George Washington’s farewell address in 1796, reminded everyone that “all the dispositions and habits which lead to political prosperity, religion, and morality are indispensable supports.”  Barack Obama gave himself a high-five for undermining them during his address as he reflected on his two terms in office.  During his tenure in office, he has pushed for and pushed America to lessen its historic religious commitment and moral fabric and urged Americans to move even further away from our founding principles.  I found it laughable that he attempted to transform George Washington into a fellow progressive as he ignored Washington’s plea for religion and morality in America.  Mr. Obama’s argument about Washington’s view of ‘self-government’ was a plea to abandon our core convictions and embrace diversity at the expense of religious and moral conviction.  George Washington contended, in his farewell address, that self-government is dangerous IF it becomes disconnected from conservative and righteous principles.  He repeatedly warned against the abandonment of religion and morality and allowing the intrusion and inclusion of self-sufficient humanism.  He believed that to do so would result in a government that was tyrannical and produce, at best, an elitist oligarchy and, at worst, a hard tyranny.  Both, Mr. Obama contends for and Mr. Washington warned against.

For the former President Barack Obama, it was “All About Him” and never about “America or Americans.”  I am praying that this new President Donald Trump will focus on America and Americans and keep any narcissism in check and be willing to do what is right for this nation not simply to make himself look or sound good.  He will not be afforded the media support and every act and action will be questioned.  He will find an antagonistic congress like virtually no president has ever experienced.  Can he succeed?  Only if we who pray do so. Only if we who love freedom and America demand cooperation in Congress.  Only if we the electorate stay focused and in each successive election prune the political tree and get rid of the deadwood.