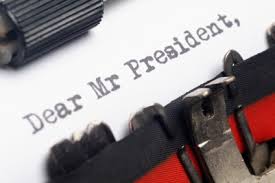 BAN EVIL!  That’s what I said because it makes about as much sense as your unilateral assault on the 2nd Amendment as somehow a proper response that might somehow save even one life.  Virtually everyone, including your crowd, admits it will do little or nothing and would have done nothing to prevent the horrific mass shootings.  But, you turned on the tears and are seeking to politicize the issue as you have on many other issues including race relations hoping to achieve your ideological agenda and establish your LEGACY even if you are a Legend ONLY in your mind.

Never mind facts and reality for if by Executive Action/Order you can resolve a problem, how about issuing one that BAN’S EVIL!  That’s right from this day forward Evil is illegal and by taking that action, everyone prone to committing an act of evil will comply because or your edict.  Simple solution, right?  WELLLLLLL…. There is a small problem that is not so small and that is the depravity of the human heart.  You cannot, by legislation or Unconstitutional presidential edict make people civil, moral, sane, rational and tolerant.  Sorry, that is only possible in the Utopian world that you and many of your followers seem to believe exists alongside your herd of Unicorns. 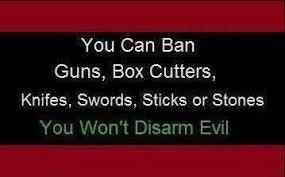 EVIL and VIOLENCE have been around, for mankind since Cain killed Abel and is not going away UNTIL and UNLESS we enter the time when Jesus completely rules and reigns on earth.  At that time, according to the Bible, men will beat their weapons of war into farming tools and the lion and lamb will live in harmony.  That is not the current condition of the world and is not going to be via nice talk, presidential edicts, UN directives or Congressional acts.  I know that when you were auditioning for the job of President you declared you would end the Unconstitutional actions of George W. Bush, whom you accused of using Executive Actions/Orders to bypass Congress and the will of the people.  My, what a difference an election or two makes isn’t it?  You also said you would be the catalyst to UNITE Washington and the World would once again love and respect us simply because you would tell them how evil we were and then unilaterally take actions showing weakness, not strength.  Your mind or rhetoric avowed the world would follow suite.  How has that worked out?

We have a world filled with evil, diabolical and dangerous people so driven by an ideology or so narcissistic and sadistic they will stop at nothing to achieve their objectives.  That is not solved by a UN Resolution, an Executive Order/Action or even legislation.  If we want to keep America and Americans safe and provide a means whereby we can defend ourselves, our property and those we love we need to face reality.  Sir, if somehow you and the world declared that GUNS WERE ILLEGAL for anyone other than police or military guns would still be in the hands of those desiring to do evil, commit crimes, and terror.  Sir, if somehow you and the world declared that NUCLEAR WEAPONS WERE ILLEGAL there would still be nations and people in possession of those weapons.  A law is for the law abiding and has not affect or impact on those whose heart are filled with evil. 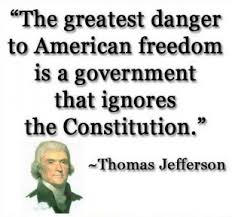 I would suggest that you could do more to curb “gun violence” by strictly enforcing the laws against committing any crime using a gun.  Make the sentences so severe the perpetrator would not see the light of day (freedom) for a very long time, if ever, and I truly believe that would have more an impact than your assault on our Constitutional Rights and Liberties.  But, if your agenda is not curbing gun violence and solving a problem but something more far-reaching and sinister then I understand your interest in this issue.  You have shown no concern for the thousands of UNBORN BABIES slaughtered every day.  You have no stomach to take the fight to ISIS or any terrorist group other than superficial actions through which you can claim action but nothing of significance comes of it.

Mr. President, you are wrong as you have been on virtually every other issue and if you are sincere you are sincerely wrong.  You have missed the truth and reality and totally misunderstood the problem and the root.  Therefore, I plead with you and all who are members of your sheepfold to pause, take a deep breath and face reality.  The problem, the underlying problem is the condition of the human heart and mind, not the weapons or tools used.  A gun like a plow, knife, fork or automobile can be a beneficial tool and is for millions of responsible, law-abiding gun owners.  Focus on enforcing the laws regarding gun violence rather than attempting to destroy the industry and prevent those of us who obey the law from practicing our God-given and Constitutional Right.

God bless each of you and God bless America again.  REMEMBER NOVEMBER!!!