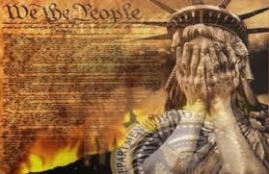 As I was returning home Wednesday night from East Texas where we do a monthly program for the Nursing Home where our mother resides I incurred an incredible migraine headache.  The last 75 miles was almost more than I could endure due to the headache rendering me unable fully focus along with the nausea that accompanied this type of headache.  I was sick physically.  I went to bed early and got up late with the same persistent headache and nausea so again I was sick physically.  As I lay in the darkened bedroom I was overcome with “weeping” not because of the pain of the headache but for my country the United States of America.  Although I know that God does not get sick I wondered if maybe God felt the pain for America that I was feeling from the headache I was suffering.

I began to weep and that continued for most of the day as I would think about various aspects and conditions of our society, the government, and the deception that exists in this great land today.  I recalled hearing a lady call in on a talk show as I traveled back home on Wednesday and she would listen to no explanation or reason as to why her particular Fiscal and healthcare situation could be directly laid at the feet of Obama.  Her explanation was, “He’s black and he would never allow that to happen to me.”  When asked if she thought her comments were racist she replied, “No, only white people are racist.”  That made me angry initially and then incredibly sad and despondent.  I thought and prayed, “Oh God, how can this be? How can anyone be so blind to their own prejudice and bias?”  But, I see it virtually every day and not all the racism I hear comes from blacks I hear some from whites as well.  Liberal whites living in a “guilt complex” and wanting to impose that attitude on everyone else.  I also hear it from some that are on the other side and are so angry that they fall into the trap of categorizing every one of a particular race or gender in a certain manner.  Racism is alive and well in far too many hearts and minds and the President has encouraged that attitude in his actions, words, and demonstrated attitude as well as that of his Attorney General.  You can disagree and that is your right but that is how I see it.

I see destruction of ‘HOPE’ for future generations due to the massive debt and deficit and the prospect that it is going to continue to spiral out of control to the point that we will literally be pushed over the edge of the ‘REAL FISCAL CLIFF.’  I weep for my grandchildren who, if this nation survives the next four years and  somehow the Congress and the next President wakes up and begins to move toward repealing some of the incredibly destructive things that have come out of this administration, I still wonder if they will have a future.  I wonder if they will, as we, look at the bleak dilemma our nation is in and begin to work to try to secure a hope for their grandchildren or great-grandchildren while realizing that there is NO FUTURE for them personally.  That makes me weep!

I weep when I see a President who has promised to have the most “Transparent Administration” in history become so divisive, partisan, and secretive while clearly discernible laws are broken to hide information, as well as trashing the Constitution of this great nation.  I see the D.O.J. backing the President and vice-versa in ignoring the Rule of Law, the Constitution, Congress, and the American people.  I see his hand outstretched in friendship to those who would destroy us and his back turned to those who have befriended us through the years.  I weep!

When it comes to getting control of the INSANE AND INSATIABLE SPENDING that is crippling this economy, destroying small businesses, and ruining millions of lives and hear the President declare that we cannot make a 2% cut which, is approximately what Sequester amounts to I weep!  The General Accounting Office and Congressional Budget Offices have identified several hundred billion in overlaps of agencies and programs and waste that could easily be cut and he laments that the dastardly Republicans are going to cause the World to End if they do not compromise and ignore cuts but give him more revenue.  When you realize that the cuts in Sequester would be less than the waste and overlap that those two agencies have identified you have to wonder what his motivation is for wanting to so deeply cut the Department of Defense while making no cuts to the EPA, HUD, or other agencies that he likes.  I weep!

When I hear Republicans basically agree with him that Sequester is dire and dare not take place, I wonder if there is any hope for this nation and I weep!  When I hear people like Karl Rove attack the truly conservative candidates that we have elected and declare that only he and his billionaire buddies are capable of telling us who to nominate, I weep!  There was a time when Democrats and Republicans alike would ask “Is this Constitutional?”  There was a time when those on both sides of the aisle had at least a token interest in doing what was best for this nation and serving the people who sent them to Washington but that day seems to be gone forever and I weep!

I am sick emotionally over the condition and position of our nation!  I am sick in my heart when I realize how far this nation has drifted from its foundational principles and core values.  I am sick when I realize that the seeming design of this administration and the left is to dismantle and destroy the opposition party, the Republicans and the Republicans playing into their hands and self-destructing.  All these are things that make me weep for my nation.

I dare not cease my intercession for the nation and the people of this nation.  I dare not lose my confidence in God and that someway somehow the American people will do what they have done for generations, rise up and stand together and stand tall to overcome this condition and situation.  I dare not lose my willingness to do whatever is required of me to help facilitate the recovery of our lost values, constitutional principles, and preserve our God-given rights, freedoms, and liberties.  But, as I work tirelessly to accomplish that I WEEP FOR MY COUNTRY!

May God be with you, protect you, enlighten you, encourage you, and empower you to do what He would have  you do in this struggle both naturally and spiritually and may God deliver this nation!