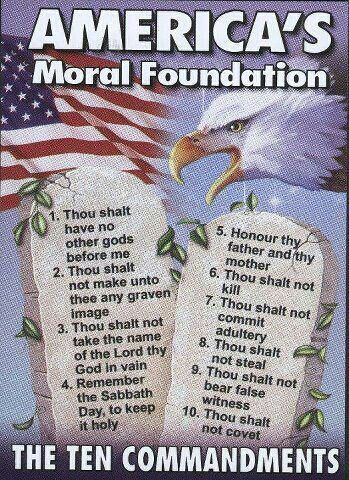 I keep hearing the argument that the Founding Fathers and the Framers of our American Constitution we devotedly determined to ensure that nothing of the Bible or Christianity could be included in the public sector, but I keep finding problems with that argument.  Each time I broach those findings to the Separatist, they get angry, quote isolated out of context statements by some of the founders and frequently make their attack personal.  Hear me carefully, I DO NOT want the Church to run the State and do not want the State to run the Church.  However, I cannot ignore, nor do I desire to cast aside the biblical principles clearly invested in our Laws, System of Government, and Constitution.  Disagree if you please but examine the facts carefully before you reject my argument.

I believe it is incredibly taxing to embrace the contention that there is any single work that has had a greater impact on America life and culture than the Ten Commandments.  The Ten Commandments formed the foundation for general morals in America as witnessed in the Common Law.  When Moses revisited the Ten Commandments God promised that it would go well with the nation, and they would prolong their days in the land they were about to possess and occupy.  That Promise was not lost on the Founding Fathers who openly endorsed the application of the Ten Commandments to Civil Law.  John Quincy Adams contended: “The law given from Sinai was a civil as well as moral and religious code; it contained many statutes… of universal application-laws essential to the existence of men in society and most of which have been enacted by every nation which ever professed any code of laws.”  Noah Webster agreed: “Where will you find any code of laws among civilized men in which the commands and prohibitions are not founded on Christian principles?  I need not specify the prohibition of murder, robbery, theft, and trespass.”

I find it amazing when you realize that these laws and precepts are vital to the existence any society, and yet the Separatist and biblical detractors object to displaying the Commandments on such spurious grounds that there are too many versions.  They contend that displaying them would cause a “deep theological dispute” and therefore they must be banned.  The differences in the versions are largely in the number of them.  What they fail to realize that in the Hebrew they were presented without noting verse or number, that transpired when the Bible was translated into different languages.  Regardless of how they are numbered their impact on American laws is inescapable.  I will list a few examples because time and space will not permit an exhaustive exegesis of the subject.

Consider with me the following:

HAVE NO OTHER GODS.  Before you argue that has nothing to do with American Common or Civil Law you need to visit the documentation of the Virginia Colony in 1610, the Massachusetts legal code of 1641, and Connecticut in 1642.  It declared, “If any man after legal conviction shall have or worship any other god but the Lord God, he shall be put to death.”   Harsh?  Yes, as was the incorporation of HAVE NO IDOLS, HONOR GOD’S NAME, and HONOR THE SABBATH DAY.  This came from a people who had heretofore not had a copy of the Bible in their own language to read and study for themselves.  Previously the Bible had been kept from the people and only the priests were allowed to have, read, and interpret it.  This freedom led to them being so desirous of serving God with a whole heart they incorporated some stringent requirements from the Bible in Civil Law.  During the Revolution, Commander-in-Chief, General George Washington issued numerous military orders directing that the Sabbath be observed.  After the Revolution, many states continued the have laws honoring the Sabbath.  Even the U.S. Constitution stipulates in Article 1, Section 7, Paragraph 2, “the president has ten days to sign a law, Sunday’s excepted.”

HONOR YOUR PARENTS.  In 1642 Connecticut this was specifically incorporated into Civil Law and in 1934, three centuries later the Louisiana Appeals Court affirmed the continuing influence of the 5th Commandment on Civil Laws.

DO NOT MURDER.  This is, without argument a vital part of our Civil Law and the insertion of it acknowledged as being based on the Commandment of the Bible.   Numerous State Laws acknowledged the biblical directive of DO NOT COMMIT ADULTERY and indicated so in the wording of their laws such as Texas’ highest criminal court in 1898 stating, “Thou shalt not commit adultery is our law as well as the law of the Bible.”  In 1955 the Washington Supreme Court affirmed that “Adultery, where promiscuous or not, violates one of the Ten Commandments and statutes of the state.”

DO NOT STEAL.  In 1951 the Louisiana Supreme Court acknowledged: “In the Ten Commandments, the basic law of all Christian countries, is found the admonition, “Thou shalt not steal.”  Hey California, in 1940 your Supreme Court agreed: “Thou shalt not steal” applies with equal force and propriety to the industrialist of a complex civilization as to the simple herdsmen of ancient Israel.”  In fact, in 1914 a federal court declared that the Constitution’s “takings clause” prohibiting government seizure of private property was an embodiment of the Eight Commandment against theft, including government theft.  Have we drifted from that mindset today or what?

DO NOT PERJURE YOURSELF.  In 1642 Connecticut the law read: “If any man rise up by false witness, wittingly and of purpose to take away any man’s life, he shall be put to death” and referenced scripture as the basis of the law.  In 1924 the Oregon Supreme Court affirmed Oregon Law that, “No official is above the law. “Thou shalt not bear false witness” is a command of the Decalogue, and that forbidden act is denounced by statute as a felony.”

DO NOT COVET.  Is the foundational basis for many laws and prohibitions listed in the other commandments, as stated by William Penn.  He declared, “He that covets can no more be a moral man than he that steals since he does so in his mind.  Nor can he be one that robs his neighbor of credit, or that craftily undermines him of his trade or office.”  John Adams, a staunch defender of Property Rights declared, “The moment the idea is admitted into society that property is not as sacred as the laws of God and that there is not a force of law and public justice to protect it, anarchy and tyranny commence. If “Thou shalt not covet” and “Thou shalt not steal” were not commandments of Heaven, they must be made inviolable precepts in every society before it can be civilized or made free.”

The Ten Commandments are so intertwined into and the foundational basis of our Moral Law and Civil Law it is impossible to miss.  The effect of the Commandments is the basis of having a truly civil society. It does not matter if your neighbor is an atheist or follows any other religion, if he governs himself by the Ten Commandments’ precepts and requirements he will not seek to kill you, steal from you, take your wife or other possessions, or defraud you.  The benefit derived from that, regardless of what religion or the absence thereof is inconsequential to law and civil society, he will be a good citizen.  Remember John Adams’ declaration, that even if the Ten Commandments “were not commandments of heaven, they must be made inviolable precepts in every society before it can be civilized or free.”

Regardless of what you believe regarding religion and the Bible, surely you realize the benefit of the influence these Commandments have on our civil and moral law, government, and society.  I do not run from my love for or belief in the God and the Bible, nor did our Founders.  Our drift from our foundational moral moorings has produced much of the ills of today’s society.

Note: Thanks to Wall Builders and David Barton for providing much of the research for this article.