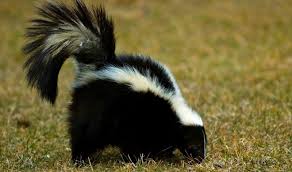 That title or headline would be taken, by some, to mean, Republicans and especially Donald J. Trump the President of these United States.  However, my inference is with regard to James Comey in particular and the Leftist Ideology in general, which includes Robert Mueller and the higher-ups in the many bureaucracies of Washington, DC.  I smell a skunk and smelled that easily detected aroma long before now but some of the latest shenanigans by Mr. Comey, the DNC, the talking heads of the MSM, and the leading Democrats the smell needs immediate cleansing.

James Comey, by his own admission, in his book that is largely a work of fiction, has admitted he has battled an inflated ego all his life.  He has long been anti-nationalism, anti-core religious beliefs as embraced by most evangelicals and many, if not most, followers of the Christian faith.  He is making his book tour and finding a place in front of every camera or microphone he can in his effort to “harm” if not “destroy” the duly elected president of the United States of America.  He now seems to envision himself as the guardian of truth and the custodian of morality in America.  Yet, he lied to Congress, illegally leaked documents and information, and has conveniently produced “notes” or “memos” that have all the earmarks of fantasy or editing to support his assertions.  He, as did Mr. Mueller, Mr. McCabe, and others within both the FBI, NSA, and DOJ have ignored clear evidence against the Democrats or Democrat in particular, Hillary Clinton while using phony intelligence to dig deeply into every facet of Donald Trump’s life.  What next?  Will they examine how many squares of toilet paper he uses in a sitting?  Yes, I’m being facetious but it has reached that level and any credibility of the Mueller investigation or Comey’s work in the FBI has taken leave and that Elvis has left the building.

James Comey has verbally declared that often he felt that his job “sucked” and was frequently “pissed off” and then pretends to be Saint James Comey the guarding of truth and morality in America.  He talks about values while plunging himself into the cesspool of profiteering and partisan politics that is on par with Hillary Clinton and Barack Obama.  He is attempting to become the mouthpiece and spokesperson for “decency”.  That is laughable because when any of the leading Democrats talk about “decency” their arguments must be viewed as “do as I say, not as I do.”  The Left claims they have a monopoly on “morality, decency, and the high ground” while wallowing in the muck and doing what they accuse others of doing.  But, their claims are embraced by the media and all the talking heads chant their diatribe and present it as truth.

Recently, I was with my wife in a store and at the end of the business transaction, the owner of the shop began to talk about violence and guns.  She said, “Why would anyone want to allow guns that were manufactured for the police and the military to be allowed in the hands of citizens?”  I corrected her about the guns and verbally demonstrated how the AR-15 and similar semi-automatic rifles ARE different than those designed for the military.  She was shocked to learn some of the information I presented but still wanted to regurgitate the spin of the leftist and want control of guns.  I suggested to her that the problem was not the weapon of choice, in this case, the gun, but the FAILURE to DISCIPLINE.  We have failed this generation by abandoning DISCIPLINE in the home and in the schools.  We have abandoned our moral principles and parental responsibilities and allowed liberal leftists in the classroom, media, Hollywood, and government to indoctrinate our kids with the leftist globalist mentality.  We have allowed this upcoming generation and one or two before it to develop an ENTITLEMENT MENTALITY where they believe they are to have whatever they want.  We have allowed Freedom of Speech to become IF YOU AGREE WITH ME SPEECH not true Free Speech.

James Comey detested Jerry Falwell long before he hated Donald Trump and that can be documented by reviewing his thesis at William & Mary where he described his concern about “troubling nationalism.”  He specifically cited Jerry Falwell and argued from the view of Reinhold Niebuhr.  With his expressed views and anti-religion found in the thesis, it is no wonder that his intense dislike or hatred of Donald Trump’s “Make America Great Again” campaign pressed his button.    He detested the Regan Patriotism Movement and used Niebuhr’s line about the “idolatry” of nationalism.  He believed, as did Niebuhr that nationalism and warned that it would produce a state of national pride that would be destructive.  He argued that American patriotism could and, in his view, probably would lead to a condition where our virtues are turned into vices.  When Donald Trump embraced “religious rights” that must have been the last straw for Mr. Comey and argued that the traditional Christian morality was too narrow and, in his book, takes veiled shots at both nationalism and Christianity.  He is nothing more than the average leftist liberal greedy denizen of the DC Swamp.

Mr. Comey can try until the cows come hope to portray himself as a man seeking truth and moral high-ground, but his pompousness betrays that assertion.  His fabrications and failure to offer verifiable references to his accusations against Donald Trump while ignoring the glaring mountain of evidence against Hillary Clinton and other high-ranking Democrats of the previous administration reveal who he really is and his objective.  We may have had an “independent” FBI at some point in our history but we do not today.  Men like Robert Mueller, James Comey, Andrew McCabe reveal the partisan degeneration that agency has plunged.  The DOJ and Obama holdovers in the NSA, CIA are nothing more than legal arms of the Democrat ideology and if America is to survive as the Constitutional Republic of our Framers and Founders we must address these lawbreakers and hold them accountable.

I want TRUTH to be revealed and JUSTICE to be served on whomever it needs to be served.  I want Congress, especially those who have claimed to support the Constitution and desire to get to the truth to ACT in a way that will end partisan fishing expeditions and honestly investigate the Democrats with the same vigor they are trying to oust Donald Trump.  The DNC’s ridiculous lawsuit, the continued manipulation of the innocent, and the double-standard of the MSM needs to be addressed.  WHAT CAN WE DO?  Possibly nothing, but we must try to elect people to represent us in Washington, DC who will refuse to simply follow the Party-Line and stand for the American People and the Constitution.  For the most part, that means voting out the Democrats and finding those who are Republican or Independent who will not cave to the pressure of DC.

My personal view is that we need a sincere and concerted effort to restore our basic traditional moral values in America.  We need to restore discipline in the home and in our schools.  We need to find the courage to resist the bribery the politicians love to offer in Entitlements and Promises and DEMAND they follow the Law, do their jobs, and truly represent WE THE PEOPLE.  We must stand firm in defense of the Constitution and our inalienable rights.  If we surrender our rights for a false sense of security, we will lose both.