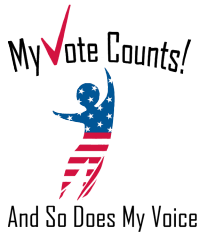 Let me answer with a question, “Does Your Life Count?”  If you are a living breathing human being and a member of the human race, it most assuredly does!  Both your life and your vote.  Your vote may not seem to count because the candidate may win handily and would have won had you, as a lone individual not voted.  The candidate you support may lose handily and would have lost regardless of whether or not you voted.  That does not mean your vote is unimportant.  That may sound illogical to many and I’ve had this discussion before, sometimes with success in enlightenment and sometimes in abject failure because the other person’s mind was a sealed as a waterproof vault buried deep within the ground.  Their stance was, “Don’t confuse me with the facts, my minds made up.”

We have a Constitutional process for electing members of Congress and the President of these United States of America.  In Presidential elections, we have a process that involves a two-part method for determining who will serve for the next four years as President.  It involves the popular vote in each state and then the electoral college vote in which the electors usually vote according to the determination of the popular vote of each state.  Some states are winner take all and some are proportional and in the proportional states, the individual vote becomes clearly important in the minds of virtually everyone.  In state and local elections, we have state constitutions that determine the statewide process and in local elections, the charters or constitutions of those entities determine the process.

Voting, in America, is a right and a privilege!  In my mind and in the minds of our Framers and Founders appeared to believe the importance of voting.  That would make it a civic if not moral duty because we are supposed to be a self-governing nation, not an oligarchy, tyranny, monarchy, or any other system.  Our is supposed to be a government “of the people, by the people, and for the people.”  I compare it to a business.  How so, Roy?  In a corporation or business that is publicly traded and owned by the employees and private citizens if those holding shares of ownership disregard their privilege of voting in corporate elections they cede their ownership to the managers.  By that I mean, if we simply take what we can get, in the way of dividends but pay no attention to how the corporation or company conducts business we are takers (which many investors are) and not owners.  In a sense, we are selling our shares for the quarterly or annual dividends we are paid.  That, I would argue, does not argue that does not absolve us of any wrong done by that company or corporation morally although we are safe legally.

In our American government, it is incumbent upon us, the legal citizens of this nation, to involve ourselves in the affairs of government.  Often it seems that the only possible means through which that can transpire is in our exercising our right to cast our ballots on election day.  We can and should go beyond that and pay attention, communicate with our Representatives and Senators as well as the President.  According to our American Constitution, we have the right to express ourselves, worship according to the dictates of our hearts, expect a fair and prompt trial by a jury of our peers, self-defense, and many other things.  We have the right to choose who represents us in various offices in our government and in that right and privilege comes responsibilities.

It is our responsibility to be informed.  Although the government should be responsible and accountable in dispensing genuine information it is not solely their responsibility to disclose everything to us.  They should, but they do not and as an owner of our federal government, as a citizen, I must seek to know.  If I fail to participate in the process I maintain the right to complain but I have no moral standing to do so.  I have abdicated my privilege and responsibility and allowed others to determine the direction of the nation although my voice and vote are absent.

In a family unit, everything is not done in a purely democratic process.  The Majority does not rule and should not. The parents have authority, power, and responsibility regarding raising their children.  In government, if we are uninformed we are unarmed and unable to properly address our grievances.  If we do not vote we express that we either do not care, government is unimportant to us, or we are willing to be a docile sheep led wherever those in power desire to lead.  Some, feel so hopeless and helpless they have cast off all hope and therefore do not vote.   That is tragic!

In today’s many protests by the leftist activist, I see a smidgen of expression that People Care!  Please don’t misunderstand, I am fully cognizant that many of those protesting are clueless as to what they are truly protesting.  Some are paid protesters and simply following the diatribe, rhetoric, and directive of those organizing and coordinating the protests.  Some of them, hold deep views on some things, but with no real understanding of our governmental process.  Many of them know little of the Constitution or our Political Process.  They have their hands out and believe the Socialist and Activist arguments that “Life is supposed to be Fair and Equal.”  They believe that the Rich are evil, and it is important to “stick it to the man.”  They represent one segment of society and one would think that if they were truly as concerned as the demonstrations suggest they would vote, but often they do not and do not care to do so.  They are not the only ones who do not vote.  Many follow the mentality, “Let the Politicians take care of Politics.”  I continue to argue that is exactly how we got in this mess!

No, your individual vote may or may not change an election, but it is your investment in the process and your acknowledgment of your responsibility as a citizen owner of our government.  I cannot imagine a person having a share of a business and not having any interest in how that business is run, the direction it is taking, the frugality of the managers, and the bottom line.  However, there are millions who do just that when it comes to government and voting.   In November we have the clear choice between Socialism, Globalism, Liberalism, Higher Taxes, Bigger Government and More Debut or Free Market Enterprise, Constitutionalism, Liberty, and Freedom and an opportunity to reduce the size and scope of government.  The ultimate question is “What Do You Prefer?”