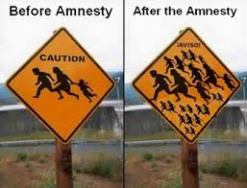 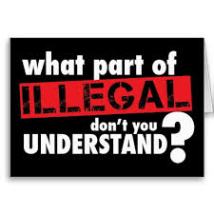 Barack Obama said, in support of the bill, “The time is now to give young illegals a pathway to citizenship.”  He did not call them ILLEGAL only that they broke the rules getting here and should not be allowed go GAME THE SYSTEM.  I find that laughable in that this President is one of the chief GAMERS OF THE SYSTEM on so many fronts that he would even suggest that the ILLEGALS are going to pay any penalty.  He refuses to enforce our IMMIGRATION LAWS now and has rendered the ILLEGALS to a mind-set that says, “We are not going to be prosecuted or deported so why not GAME THE SYSTEM.”  They already have FREE – education, health care, welfare, and in many cases vote so why would they even care about LEGAL STATUS?  Most of them do not care about American citizenship or America they are here for what they can get and they are getting it FREE OF CHARGE!

I find this bill a tool to expose the true colors of “so-called” conservatives in Congress and identify them for what they are – Political Hacks who are only interested in projecting an image and thinking, mistakenly, that they will secure the vote of the illegals in future elections.  No, the blacks vote En masse for the Democrats and Obama, the Hispanics vote heavily for the Democrat Liberal Agenda, as do most of the other “so-called” minorities.  Republicans you won’t get their vote by trying to press this type of legislation and you will lose some of the conservative vote in the process.  The end result is that your vote totals will decrease not increase.  You will grow the government again, and this situation with ILLEGALS will not be solved, the border will not be secured, and we will be talking about this again in a decade or so.  It will be costly and is ill-advised. 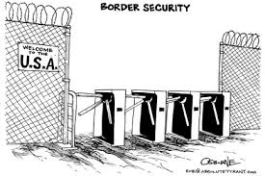 We MUST secure the border if we are to have any hope of solving the ILLEGAL problem with regard to immigration.  Anything short of that and ahead of that is a bad idea.  My Senators and Congressman know how I feel but now is the time to advise them again because the bill is being debated in the Senate and they will add a few amendments that will allow them to say, “Well we fixed the issues and now I can support it.”  This is a very bad idea, because the amendments WILL NOT FIX the problem or the bill.  IT is time to SAY NO to this legislation, focus on Border Security and then we can talk about what to do about the ILLEGAL IMMIGRANT problem.  That being said, I still have a problem with the ILLEGAL component of the problem.  When did ILLEGAL become a good thing?  When did it become honorable to BREAK THE LAW?  When did increasing the voting base of the Democrats and the Liberal Left become a desirable thing for any Conservative, American Patriot?  Sorry, but Senator if you vote for this bill you made it to my NO MORE LIST.  Same goes for you in the House of Representatives. 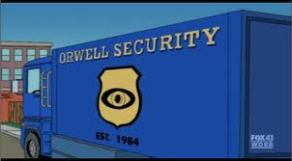 We are told that these people are in the “shadows” and to find out WHO THEY ARE we have to give them AMNESTY.  I find that almost laughable seeing as how our government can track all of us LEGAL CITIZENS via phone, email, etc. but can’t discover who these people are without AMNESTY.  That is such an incredible indictment on our investigative abilities it is a crime or at least a crying shame.  No, this is a political football and nothing more.  Even the RINO John McCain admitted that this bill will not garner ONE VOTE for the Republicans it will only say, “Look at us we don’t hate Hispanics.”  We don’t, but we do not endorse ILLEGAL ACTIVITY including immigration and that is not, hating someone it is supporting the United States, our Laws, and Constitution.  Sorry Mr. McCain you and Mr. Rubio along with all the other RINO’s have missed the boat on this one.

May God be with you and may God bless America again!