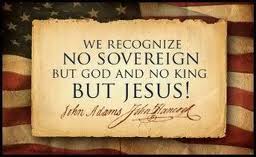 Maybe it is just me but have you noticed that the current occupant of the Oval Office seems to operate as though he were King of the United States of America not President of the United States of America. In America we have a ‘three branch’ system of government or we are supposed to according to the United States Constitution ratified by the States. However when the sitting president declares, “I have a pen and a phone” and “I am president I can do what I want” one realizes that the Constitution, Congress, Courts, and Constituents are meaningless to this individual and that is a Constitutional problem of epic proportions. 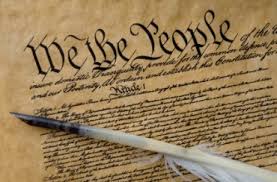 In the United States Constitution the first three articles outline the three branches of our government and list the powers and limitations they are supposed to adhere. Article II outlines the duties of the Executive Branch. Mr. Obama who claims to be a Constitutional Law Professor should go back and read this once more for he surely has forgotten the limitations. The United States President is elected to a four-year term by the electors from each state plus the District of Columbia. This is called the ‘electoral college’ and is comprised of 538 electors or a number equal to the number of Representatives and Senators in Congress. The citizens of each state vote for a slate of electors who vote for the president on the date established by Congress. In order to become president the requirements are specific. He/she must be a ‘natural born’ citizen not ‘naturalized’. He/she must be 35 years of age or older. Amendment XXII placed a two-term limit on the office of president. Not rocket science and something every child in junior high should know.

The President is Commander-in-Chief of the armed forces and has the power to call into service the state units of the National Guard, and in times of emergency may be given the power by Congress to manage national security or the economy. He/she has the power to make treaties with Senate approval. He/she is responsible for nominating the heads of governmental departments with Senate approval. He/she also nominates federal judges and the justices of the Supreme Court, again with Senate approval. He/she can issue pardons for federal offenses, can convene Congress for special sessions, can veto legislation approved by Congress. It is a limited veto not a line-item veto and a veto can be overridden by a two-thirds vote of Congress. The President is to deliver a State of the Union address annually to a joint session of Congress.

Congress holds the power to declare war yet he/she can send troops to battle without an official declaration of war. In 1973 the War Powers Act sought to define when and how the president could send troops into battle by adding very strict time frames for reporting to Congress ‘after’ sending troops into battle. 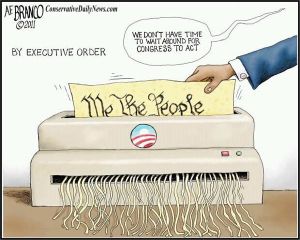 Executive Orders are supposed to be for ‘times of emergency’ not the whim of the president. This has become so limitless that it virtually relegates Congress to a meaningless status and elevates the president to an imperial level. Executive Orders have been abused by almost every president in the past and evolved to the place that Mr. Obama’s statement, “I have a pen and a phone” are a revelation of the Imperial Tyrannical Power of the President. Congress could and should take steps to bring this in check but they are not likely to do so. The Democrats enjoy the current power of this action and Republicans envision a time when they will regain power and want it protected for their use. Both, in that sense, are disregarding the Constitution and the responsibilities and duties of Congress to serve as a ‘check and balance’ to the other two branches of government.

It is appalling to watch the Constitution so thoroughly shredded by action or inaction in Washington. I do not wonder what our Founding Fathers would think I believe the existence of the Constitution and Bill of Rights as well as the volumes of quotes and expressions from them tell us they would consider our current state akin to the situation which brought about the initial America Revolution. They would DEMAND the president ‘cease and desist’ and that Congress immediately take the Constitutional steps to insure that this never happens again. Of course, our current legislators and president see it differently and only as WE THE PEOPLE get their attention is there hope!