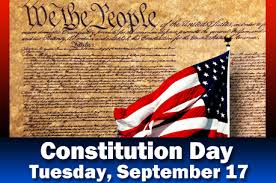 Constitution Day was Thursday, September 17, 2015 and we celebrated the anniversary on which 39 brave souls signed the United States Constitution.  History, for the most part, credits James Madison with being the father of the constitution and Thomas Jefferson as the architect of the Declaration of Independence but they were just two pieces in the puzzle.  How many know that Gouverneur Morris of Pennsylvania almost single handedly meshed together the final wording of the constitution?  We hear little about him and most know little other than his unusual name.

There are others and one in particular that is worthy of note is Roger Sherman the delegate from Connecticut.   Without Robert Morris and Roger Sherman one could legitimately ask if the United States Constitution or America would even exist today.  It would not be the America the founding fathers gave us or the America we enjoyed for over 200 years.  Sherman was one of, if not the, prime engineer of the Connecticut Compromise which guaranteed the small states would have an equal vote in the United States Senate.  Interestingly that is the only part of the constitution that cannot be changed. 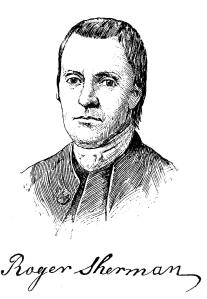 Roger Sherman was born April 19, 1721 and died July 23, 1793.  He was one of the early and foremost politicians and lawyers in the new Republic.  He was a member of the Committee of Five charged with drafting the Declaration of Independence.  He grew up in Stoughton, Massachusetts and received his education in his father’s library without formal education.  He was admitted to the Litchfield bar in 1754 and became Justice of the Peace.  He was treasurer of Yale University and received an honorary Masters in Arts degree.  He was elected to the Continental Congress in 1774 and in 1787 he offered a solution to the amendment of the Articles of Confederation.  The solution was known as the Great Compromise and laid out the plan for the people to be represented in the House of Representatives by proportion.  The state would have one representative for each 30,000 people and each state would have two Senators.

Roger Sherman signed the Declaration of Independence, Articles of Confederation, U.S. Constitution and the Articles of Association.  Madison nor Jefferson could make that claim.  His descendants have had a significant impact on American history, especially in the Northeast.  Let me list a few if I might:

Others served as lawyers for the railroads, solicitor general and presidents of the New York Bar Association.  Archibald Cox, great great grandson of Sherman was President John F. Kennedy’s solicitor general and in May of 1973 he was appointed as Watergate Special Prosecutor.  We have seen the Sherman descendants involved in America politics for generations.

When so many have given so much to carve out the America our founders and the colonist so valiantly fought for how dare we allow any interloper to usurp that great document.  I do not care if they are Democrat, Republican or Independent the Constitution is the Constitution and must be preserved and followed.  It, not the President, Congress or the Supreme Court is that which is to guide our nation.  If we fail to elect an individual who is committed to the Constitution of these United States in the 2016 Presidential Election we are signing the death warrant of the American Republic.  The number one thing I want to know from the candidates is their view of the Constitution.

God help us do that which is necessary to restore America to its rightful status as a Constitutional Republic.   God bless you and God bless America!