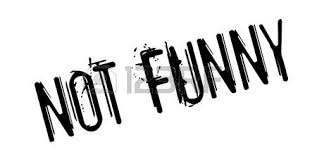 I told someone, “This could be laughable, but it’s not!”  What are you talking about, Roy?  The barrage of accusations against men everywhere for sexual harassment and sexual abuse is the case in point to which I refer.  I am not saying the men accused did not do what they have been accused of but the flood of accusations, some of which, are no doubt, bogus is almost comical.  NO, I am not trying to make light of that type of reprehensible behavior when it occurs, but it seems to be in vogue today if you are a woman to have been harassed or abused.  AGAIN, please don’t misunderstand my statements for I find that kind of behavior inexcusable and to be condemned.  I also find sexual predatory activities by females equally vile and if it involves children it is beyond the pale and deserves the severest of penalties.

There have been accusations against politicians or the famous that were unfounded and designed for extortion or destruction rather than seeking justice.  What I find almost laughable are the cries from politicians in Washington for Judge Roy Moore to step aside because of the allegations against him saying that because of the seriousness of the allegations he is not fit to serve.  Those same people have turned a blind eye and a deaf ear to the actual incidences by fellow members of Congress and some of them guilty are saying Judge Moore must step down.  Is it any wonder that people have such a low regard for politicians in general and Congress in particular?  It has almost reached the point where you must ask, “Who has not either paid hush money, settled claims, or been accused of sexual sins?” rather than asking who has.

Our founding fathers warned us against politicians that were deficient in integrity and honesty and, yet we have repeatedly sent them to Washington.  The amazing thing is that people will vote for scoundrels and then complain about the scoundrels in government.  George Washington said, “Virtue or morality is a necessary spring of popular government.”  James Madison argued, “To suppose that any form of government will secure liberty or happiness without any virtue in the people, is a chimerical idea.”  George Washington also said, “Few men have virtue to withstand the highest bidder.”  Sadly, that is quite reflective of today’s political climate where special interests and lobbyist seem to have just what is needed to attract or buy enough politicians to achieve their objectives.  Former President and General Dwight Eisenhower said, “The qualities of a great man are ‘vision, integrity, courage, understanding, the power of articulation, and profundity of character.’”  Calvin Coolidge contended, “Character is the only secure foundation of the state.”

In today’s political climate many of those now serving in Congress are tainted by corruption of some kind.  There can be no justification for corruption and the partisan defense of corrupt politicians needs to go the way of the Dodo Bird.  We need to find men and women of integrity and character who are willing to do the heavy lifting, make the difficult decisions, honor the constitution, and follow the rule of law and allow them to represent us in Washington.  UNTIL we accomplish that feat we will continue to see the erosion of our liberties, the disintegration of our foundational moorings, and the continued infringing of our rights and liberties by the larger Oligarchy called The Establishment made up of politicians of both parties.  Those advancing the ideology of “fundamental transformation” of our Republic because it restricts them in their pursuit of POWER need to be afforded the opportunity to GO HOME or GO SOMEWHERE other than Washington, DC.

Who is to blame for our decline in America, politically?  That blame must be shared by many.  Of course, as a Christian, I lay the initial blame at the feet of the devil, but it goes far beyond that.  We assuredly can blame corrupt, greedy, self-serving, and ideologically driven politicians but they are not totally to blame.  Why?  Because if we did not allow them the prize of election they could not do their deeds and oppress and suppress us to the point of losing many of our liberties and freedoms.  If we UNIFIED as a people and said, “NO MORE” those left standing in the Halls of Congress would walk softly knowing they could and likely would be next.  The only way to get the attention of politicians is at the ballot box unless you have the deep pockets of the Special Interest Groups and Lobbyist, then they are all ears.

YES, the sexual misconduct, sin, or crimes that are very real in our society are reprehensible.  No buts, that stands alone.  At the same time, the abuse by politicians of the Constitution, the American people, our Laws, and our Republic is also to be condemned.  Voting for someone simply because they have a “D” or an “R” after their name perpetuates the problem.  In Alabama, the Democrat, Doug Jones is a supporter of “Full Term Abortions” and that brings no condemnation, but Judge Roy Moore’s alleged sexual misconduct is a disqualifier.  Mr. Jones has also been blasted by a child sex abuse victim as uncaring and cited his argument against her claim as being simply a cynical attempt to extort money.  She had allegedly been abused by the football team of the University of Alabama Birmingham at the age of 15.  She said, that Jones was anything but the highly moral representative of victims of abuse and found his attacks on Judge Moore hypocritical.  I don’t know the facts in any of those cases and only state what was said by this victim.

This illustrates one of the problems in our society where allegations are often as damaging as factual proofs in a business, organization, or individual’s career.  To destroy, one only has to allege, and the allegation alone is sufficient to condemn in the minds of many.  That is a problem and has opened the door for almost endless lawsuits.  It is good for the attorney’s and media persons but bad for our society and political world.  NO, I am not attempting to sweep the awfulness of sexual abuse under the rug, ignore it, or advance situational ethics as a defense.  I am rather arguing that our moral fabric has deteriorated and we need to return to those moral moorings required to preserve and advance the Republic.  That is one of the reasons I continue to ask people to pray for America.

We can recover and restore the Republic but ONLY if we are willing to fight to the finish and abandon strictly Party Politics and fight for the Constitution, our inalienable Rights, and evict from the Swamp every denizen of the Deep State dwelling there.  Please join me in the continued effort to SWEEP CONGRESS CLEAN.