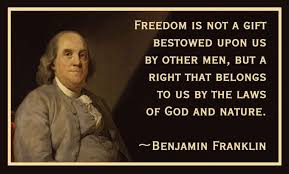 When I read the writings, and study the events of the founding of this incredible Republic known as the United States of America I am immediately drawn to the importance of LIBERTY to our Founders and the Framers.  We have the Sons of Liberty, the Liberty Tree, the Liberty Bell, and even the Statue of Liberty.  They were enamored with the idea of Liberty and so am I.  The question must be asked, WHY?  Why was Liberty so incredibly important to our forefathers?

The more I study their activities, works, ideas, and arguments the words of Patrick Henry have even more impact, “Give me Liberty or give me death” was more than a catchy cliche or declaration.  It was at the core of his and their beliefs and convictions.  They could envision no other result than winning Liberty which would give them Freedom but Liberty at all costs was their objective.  They were fighting for more than mere freedoms they were fighting for LIBERTY and to them, that was a God-given right and a possession or prize worth dying for.  I wonder how many today have that same conviction.

Freedom is defined as, “independence, the license to do as one wants, the permission to do as you please.”  That definition is wanting as it applies to a civil society and the workable interchange between men where peace and progress can be the expected outcome.  Freedom, means you have the right to do something based on a clear granting of authority or autonomy, as in self-government.  Permission, on the other hand, reflects the authorization or permission to do something and if it is something given or authorized it can be revoked.

Our Framers and the Founding Fathers had a clear grasp of the difference and to them, LIBERTY is defined in the Declaration of Independence as something that comes from God not man and therefore not something man can revoke.  The words that express their view that ALL MEN are endowed by their Creator with certain inalienable rights including Life, Liberty, and the pursuit of Happiness are incredibly illuminating.  This is a window into their hearts and minds and a reason they were willing to risk everything to FIGHT FOR LIBERTY and FREEDOM.  Any given Freedom can be revoked by those granting that Freedom but Liberty, in their view, and mine can only be revoked by the Giver of Life, the Creator of All Things – GOD HIMSELF!

When I hear people talk about Freedom and Democracy I grow concerned as to the understanding of what we have in America and what our Founders fought for.  John Adams said, “Remember, democracy never lasts long.  It soon wastes, exhausts, and murders itself.  There never was a democracy yet that did not commit suicide.”  We have a Constitutional Republic with a Representative Democracy not a Majority Rule Democracy as ancient Greece.  John Adams also declared that America is “a government of laws, not of men.”  Much of our law finds its roots and foundation in the Bible and the principles of God’s Word.  I know that some find that offensive, but it is an inescapable truth if we honestly examine history.

In a Democracy, any group that managed a majority regarding any Freedom could vote to rescind that Freedom and mandate that we all follow their prescribed edict.  In our Constitutional Republic, we have rights that are given to all mankind by God Himself and no government, or majority has the right to trample on that Liberty.  If we only have Freedom, given by the government or the majority, those rights within that Freedom are subject to the interpretation of those in power.  In Liberty, the rights are not derived from man’s permission but by God’s decree and He supersedes all Human Authority.  Benjamin Franklin said, “Democracy is two wolves and a lamb voting on what to have for lunch.  Liberty is a well-armed lamb contesting the vote.”

There are those on the Left and among some of the Establishment Republicans who would force us to violate our convictions and give up our Liberty and inalienable rights.  We have the right to Life.  There can be occasion, biblically and legally, where one can commit a crime that abridges that right and their life is the price of their crime.  In the right to Life, the unborn in the womb, who cannot fend for themselves or defend themselves must be protected as are all innocents.  Life means that we have the inalienable right to LIVE according to the convictions of our hearts providing those convictions do not endanger others or trample their rights.  We have the inalienable right to Liberty where we are FREE and have the permission of the Creator to live freely without undue restraint from any human government.  The words of Patrick Henry resonate deeply in my heart and I cry for LIBERTY, not simply FREEDOM.  God made me Free and therefore I am Free Indeed and in that Liberty, there is Freedom and Inner Peace.  I may have material possessions or be destitute, but I still enjoy LIBERTY and am FREE.

The government is charged with the protection of our LIBERTY, but our American government has evolved into an entity that believes LIBERTY, FREEDOM, and RIGHTS come from Government.  Therefore, rather than protecting and defending our Liberty they seek to define what Liberty is and mandate our lifestyles and allegiances.  That is foreign to what our Founders fought for and the Framers of our American Constitution negotiated.  We are Free because God made us Free!  We need to convey to our elected representatives the understanding of the Framers and Founders that among our inalienable rights is LIBERTY and we have that not because of some governmental action, edict, or legislation but because God granted us that right.  We need to convey to them that unless they return to defending and protecting the Constitution and our Inalienable Rights we will help them find other employment.  We must develop the Spirit and Commitment of our Founders and allow the Spirit of 1776 to once again become prevalent in our hearts.  Unless Liberty is something we are willing to fight to the death to preserve and attain, our Freedom will be lost in America.

I am focused on the mid-term elections in 2018 and the 2020 elections because I realize that our American system of government is hanging in the balance.  Politicians of all stripes are proving to be our antagonist not our allies in the area of Liberty and Freedom.  Join us in the fight for Faith, Family, and Freedom and commit to LIBERTY.

God bless you and God bless America is my desire and prayer!