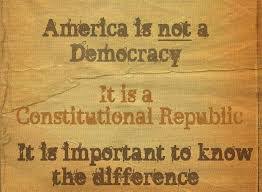 I guess it depends on your definition of America, Sovereign, Republic, and Constitutional?  I call to mind the infamous declarations of the two Clintons in their time of being questioned about their scandalous behavior.  Bill said, “It depends on the definition of IS.”  Hillary said regarding American lives being sacrificed in Benghazi through the ineptitude of her highness and Barack Obama, “What difference does it now make?”  The mentality of situational ethics has always been a part of the Clinton Crime Family’s repertoire and has long been reflected in their political and personal dealings.  It is the attitude reflected by the liberal leftists especially among the Democrat elitist and establishment politicians, the MSM, Hollywood liberals, and the Global activists seeking to transform this nation.  To them, America is anything, but a Sovereign Republic designed to be a Constitutional Republic with a specific set of Laws and guided by the original intent of the founding document, our Constitution.  America, to them, is whatever they decide it is at any given moment in history to accommodate their ideological beliefs and agenda.  That makes them dangerous!

In my personal view, it is diabolical to attempt to subvert our Constitutional Republic and fundamentally transform it into something other than the Framers and Founders established.  When any person or group of persons who seek to void that document for their ideological purposes without going through the Amendment Process as specified in the Constitution it is, to me, an act of treachery that borders on treason.  That’s how I view it, but what does the Constitution say about Treason?   In Article III, Section 3, Clause 1 of the American Constitution is defining Treason in this manner: “Treason against the United States, shall consist only in levying War against them, or in adhering to their Enemies, giving them Aid and Comfort. No Person shall be convicted of Treason unless on the Testimony of two Witnesses to the same overt Act, or on Confession in open Court.”  You read it, but do you have a clear definition of what constitutes treason?

I have wrestled with this for some time, especially considering the eight years of Barack Obama and the scandals involving Hillary Clinton, the Democrats, and others.  There are those in Congress, the media, Hollywood, and various activist groups who have repeatedly declared that Donald Trump has committed Treason.  None of those are willing to ascribe that crime to Hillary, Obama, or anyone on the left.  Never mind that the evidence is substantial that Hillary colluded with the Russians, engaged in pay for play as Secretary of State, and that Obama enabled, allowed, or colluded with nations that hate America to advance his agenda.  Never mind, there has been no evidence that Donald Trump colluded with the Russians but the fingers all point to Hillary, Obama, and the Democrats.  Never mind Benghazi, Iran, Fast and Furious, and a myriad of other things which have endangered Americans and America.  Those do not approach the level of Treason in the minds of the Leftist, but Donald Trump is Treasonous for winning the election.  How Dare Him!  Therefore, it is imperative that we develop a clear definition of what the Constitution defines as Treason and once we have it must be reinstated in the conversation regarding what is happening in American politics today.  Can we do that?  Let’s try.

The word “treason”, as interpreted from the Latin through the French means “giving or delivering up.”  The common law defined treason as “treachery or breach of faith.”  That definition and meaning if applied to Treason against one’s country or government would be so broad that virtually anything could be charged and made to stick. It would effectively destroy our system of government and make it difficult for any president to survive a four-year term in office if the opposing party controlled the legislature.  There are two categories of Treason, as understood by law, so I’m told.  The Petit Treason included things like a wife killing her husband, a servant or ecclesiastic killing his lord or master, etc.  High Treason was defined as a breach between subject and sovereign, a betrayal of (or neglect of duty or renunciation of allegiance to, in word or deed.)  Both of those are so far reaching there was an appeal from people such as Sir Edward Coke, Baron de Montesquieu, Sir Matthew Hale, and Sir William Blackstone to define Treason the highest of crimes and call for a clear and precise definition of the term to prevent governments from abusing the charge.

Our Founders we clearly concerned about protecting individual rights and defending against the arbitrary power exercised by the federal government.  They sought to present and establish a clear and definitive definition of what constituted treason, the permissible means of proving it, and the limitations of punishment for it.  The result was that in our American Constitution “treason” was limited to levying war against the United States or adhering to it enemies by giving them aid and comfort.  It could only be proved by confession in open court or the testimony of a minimum of two witnesses to the same overt act.  Alexander Hamilton felt that the definition was still too broad and was part of the reason there must be a separate Bill of Rights to protect individuals from governmental overreach and abuse.  We have had numerous cases tired and reached the Supreme Court and the case of Aaron Burr in 1807 and the cases that grew out of World War II the Supreme Court held to the specific intent must exist in “adherence to the enemy, and therefore to harm the United States” was necessary, rather than simply rendering aid.  Then in Haupt v. United States (1947), the court relaxed the standard used in Cramer v. United States (1945) by holding that the standard of two witnesses to overt acts might be supported by other evidence as to the accused’s treasonable intent, including out-of-court confessions and admissions. In Kawakita v. United States (1952) the Supreme Court ruled that dual citizenship did not diminish a citizen’s allegiance to the United States and even if that citizen intended to renounce their American citizenship they could still be held for treason.

The U.S. Code, from 1948 made a clarification of the Article 3, Section 3 definition declaring, “Whoever, owing allegiance to the United States levies war against them or adheres to their enemies, giving them aid and comfort within the United States or elsewhere, is guilty of treason.”  Allegiance to the United States means U.S. Citizens.  Assisting the enemy (foreign governments) by aiding them.  Waging War against the United States, with the goal of removing the sovereign (president) or overthrowing a lawful government, the constitution was defined as Treason.  In the days of the Constitution’s inception War meant battle on the battlefield with firearms and weaponry.  Today it must be expanded to include electronic surveillance, fabricated evidence, weaponized governmental agencies, etc.  Yes, I am saying that what went on before, during, and after the last presidential election climbs to the level of treason.  When a dossier can be developed with the help or in collusion with a foreign enemy and conspiratorially to hide its source and intent and call it “intelligence gathering” to deceive the courts and the public it qualifies.  What was their goal in the development of that document?  It was an attempt to “subvert the constitution” and prevent the peaceful and lawful transfer of power from one administration to another.  It was illegally disseminated to the media.  The media conspired to spread the disinformation to the entire world with the intent and desire to “subvert” our system of government and later to “overturn” a lawful election and thereby wage war against our Constitution.

I believe that the actions of the Left including Hillary Clinton, Barack Obama, the DOJ, the FBI, the DNC, and others rise to the level of treason.  What are the legal punishments allowed if a person is convicted of the crime of Treason?  Article 2, Section 4 – “The President, Vice President and all civil officers of the United States, shall be removed from office on impeachment for, and conviction of treason, bribery, or other high crimes and misdemeanors.”  According to the U.S. Code, those guilty of treason “SHALL suffer death, or SHALL be imprisoned not less than five years and fined under this title but not less than $10,000; and shall be incapable of holding any office under the United States.”   Can we expect an investigation into the potentially treasonous activities of Hillary Clinton, Barack Obama, Loretta Lynch, Erick Holder, James Comey, and others?  NOT SO LONG AS THE SWAMP IS FULL IN DC…  If anyone is guilty of Treason regardless of who that individual is, they should feel the full brunt of the Law and receive the due and just punishment for their crimes.  I pray that the lid will be fully removed in D.C. and all the corruption revealed in a manner the public cannot ignore it.  If our Republic is to survive, this is a MUST!