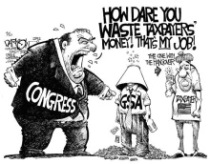 Maybe that is a misstatement and should be our tax dollars at waste!  The list is beyond my ability to be exhaustive and would in fact be exhausting to try to go through the entire list of ‘government waste’ but let’s unveil a few that you may or may not be aware of.  After we look at them I want you to answer one question – “How can you support increased government spending?’

Our wonderfully efficient and prudent government spent $2.6 Million to train Chinese prostitutes to drink responsibly.  I’m sure that there is some explanation as to how this affects our national security and national interest but I have yet to see it logically.  This same government that is continually crying about needing MORE REVENUE or TAXES spent almost $200K to see if cocaine use would cause Japanese quail engage in sexual activity.  WHAT?  We spent a cool MILLION to build a soccer field for the Guantanamo Bay detainees.  But I’m sure that their comfort is far more important than our safety or maybe if they can play soccer they won’t be interested in committing acts of terror!  We have learned that the IRS is paying out $70 Million in bonuses although that was forbidden under Sequester.  Additionally we are leaving about $7 Billion in military equipment behind in Afghanistan.  This same efficient federal government is now going to be running our Health Care Industry and somehow make it more efficient, less costly, and better – – No Virginia the moon is not made of green cheese. 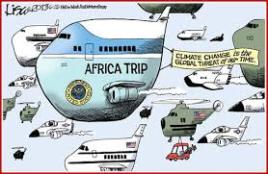 Remember how much the Obama’s African trip cost?  It was in excess of $100 Million.  Then I saw that the National Institute of Health is spending over $500K on a study that will send text messages in ‘gay lingo’ to ‘meth addicts’ to try to get them to use fewer drugs and use condoms.  How about this one – The National Science Foundation gave Yale University almost $400K to conduct research on “Sexual Conflict, Social Behavior and the Evolution of Waterfowl Genitalia.”  Now I feel so much better!  To make us feel even better we learn that the U.S. Government has or is giving (16) F-16’s and (200) Abrams tanks to the Muslim Brotherhood in Egypt and one of their headline statements has been, “Dear brothers, we must never forget to nurse our children and grandchildren on hatred towards those Zionist and Jews and all who support them.”

With regard to those working for or around this President we find that there are 139 (maybe more) White House staffers who made a minimum of $100K in 2012 and 20 or more made over $150K.  The tax-payers are handed a bill for over $1.4 Billion to care for the Obama family each year in contrast to the British spend $58 Million on the entire Royal Family.  But one that really makes me feel good about our government’s spending and use of our money is the $25K spend organizing a promotional tour for the Alabama Watermelon Queen in 2012.  But not to leave out our furry friends the U.S. Government spent over $500K to promote specialty hair and beauty products for cats and dogs last year.  I will sleep so much better at night now knowing that dogs and cats are going to get their hair and beauty products at the government’s expense.

Let’s not forget the perks for Congress where over the past 15 years our tax-payer dollars spent for ‘hair care services’ for the U.S. Senate was a paltry $5.25 Million.  We have to keep those Senator’s hair looking good.  But moving on we also spent $27 Million to teach Moroccans how to design and make pottery in 2012.  With our unemployment rate incredibly high and the economy in dire straits our frugal government managed to spend $1.3 Million to ‘reduce linguistic, academic, and unemployment barriers for skilled and low-skilled immigrants and refugees, and to integrate them into the U.S. workforce and professions.”  (That included ILLEGALS).  Don’t you feel better already?  Of course we dare not forget that various government agencies purchased over 2 Billion rounds of ammunition for ‘training purposes.’  Either they are incredibly bad shots, train an awful lot or someone has lied about why they purchased the ammunition.  Let me give you two more and I have not scratched the surface of the waste – During 2012, the National Science Foundation spent over $500K on the creation of a video game named “Prom Week” designed to simulate “all the social interactions of the event.”  WOW!   Lastly, let me note that the National Institute of Health endowed a group of ‘researchers’ to study the benefits of watching reruns on television at the tune of over $650K. 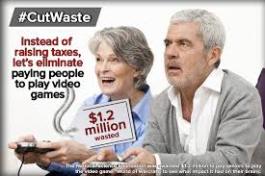 Okay, before I ask my initial question I cannot omit this one – The National Science Foundation gave $1.2 Million to a team of ‘scientists’ to determine if elderly people would benefit by playing ‘World of Warcraft.’    Now back to my initial observation and question – “In light of all this and more can you seriously support increased government spending?”  If you can then I have to ask, “What part of the pie are you getting?”  This waste may be a drop in the bucket in light of the TRILLIONS being spent but each little weight adds up to the point that the boat can no longer stay afloat.

WE MUST REDUCE THE DEBT, THE DEFICIT and STOP THIS INSANE SPENDING!  We do not have decades to get this under control we have run out of time.  The time is now!