I am growing very tired of the ‘denials’ of knowledge, involvement, responsibility, accountability, or anything else from this administration.  I keep hearing “Plausible Deniability” with regard to Mr. Obama from his defenders and supporters.  Somehow his ‘lack of knowledge’ about anything that is going on within his administration is supposed to be a good thing when in the civilian world it would be a ‘fireable offense’ but in politics it seems to be a plus and even a commendation.  That view is more than ‘dumb’ it is STUPID and being dumb is excusable but being stupid is not.  You can fix dumb by you can’t fix stupid.  Sadly, stupid seems to be a choice whereas dumb is not always by choice.  I am ‘dumb’ on any number of things because I lack the information and knowledge but I try not to be STUPID which is to ignore the facts, information, and go against reasonable logic.

What is “plausible deniability?”  It refers to circumstances where a denial of responsibility or knowledge of wrongdoing cannot be proved as true or untrue due to a lack of evidence proving the allegation. This term is often used in reference to situations where high ranking officials deny responsibility for or knowledge of wrongdoing by lower ranking officials. In those situations officials can “plausibly deny” an allegation even though it may be true.  It also refers to any act that leaves little or no evidence of wrongdoing or abuse.  That seems to be the modus operandi of the Obama Administration and while not a new phenomenon it is revolting. 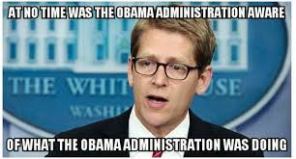 It does not seem to matter what the situation, Mr. Obama ‘did not know’ and therefore is somehow excused.  However he is the Chief Executive in the Nation so as Truman said, “The Buck Stops Here” meaning his desk.  He claims to have ‘no knowledge’ regarding the Fast & Furious disaster, Benghazi, the IRS scandals, the Data Mining of the NSA,  the Eavesdropping on friends and foes alike, and now the disastrously failed website for his signature law OBAMACARE.  He just DOESN’T KNOW!  The man that has been billed as the ‘smartest man in the room’ and one whose brilliance is so bright that people virtually have to ‘wear sunglasses’ when in his presence to keep from being blinded by his brilliance DOESN’T KNOW!  The only way I can accept that is like Despots throughout history if he does not know it is because HE DOES NOT CARE!  His ideological agenda to ‘fundamentally transform America’ overrides his interest in the details.  I can accept his ‘not knowing’ only if it comes after his edict to ‘GET IT DONE but don’t bother me with the details.’

I am insulted by anyone in his position trying to take the ‘plausible deniability’ out.  Mr. President, you are charged with protecting and defending the Constitution of these United States of America and your job as Commander-in-Chief of the Armed Forces, as the Chief Executive of this Nation, and the arguable leader of the Free World is TO KNOW and TAKE RESPONSIBILITY.  Any failure on that front is an affront to every person who voted for you and every legal citizen or resident in this nation.  You seem to always have an opinion on matters involving race that are in the public view but when it comes to the matters of our economy, healthcare, and national security YOU DO NOT KNOW that is not acceptable!  It should not be acceptable to anyone including those who worship you with a cult-like reverence.  Somewhere reason should override the rock-star like infatuation and you be held accountable for what is taking place under your watch. 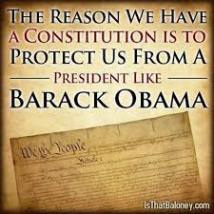 Let me go one step further and say since you seem to feel that you can suspend the Constitution, ignore the laws passed by Congress and signed by your hand or that of another President picking and choosing what to enforce why not do the same to FIX THE MESS that you claim you were unaware of?  Of course you will not do that, and I really don’t want you to usurp the Constitution further by doing so but if you really cared about America, Americans, or any segment of our society you would demand immediate actions to rectify the mess but you won’t because the mess is what you wanted to begin with.

I don’t buy your ‘plausible deniability’ and do hold you accountable for what is taking place under your watch.  Sadly, all I can do is vent and pressure my elected officials to stand firm in opposition to your failed and failing policies in hopes of stemming the tide of destruction that you have brought on this nation.  May God help us!