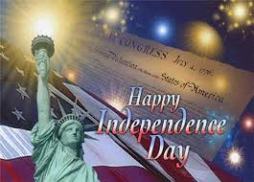 Happy Independence Day Everyone!   As I reflect back on this day in which we celebrate here in America I reflect back on the conditions and events that led up to this bold document and subsequent revolutionary war that gave us the United States of America as described in our Constitution and desired by our founding fathers.               It was June 6, 1776 that Richard Henry Lee introduced into Congress a resolution that would be accepted on July 2, 1776 which declared that the United Colonies are, and of right ought to be free and independent States.  A committed was formed which included John Adams, Benjamin Franklin, Thomas Jefferson, Robert R. Livingston, and Roger Sherman to draft a DECLARATION OF INDEPENDENCE.  The committee came to a decision as to what the Declaration should include and commissioned Jefferson to actually write it.  The draft was presented to Congress on June 28, 1776 and adopted on July 2, 1776 with a formal parchment copy was adopted on July 4, 1776 and made available for signing on August 2, 1776.  As you can see there were a number of possible dates that could have been assigned as Independence Day and John Adams thought July 2nd would be that day.  How we arrived at the specific day is not as important to me as the fact of the Declaration of Independence and America.               They made a DECLARATION of Independence because they saw no other course of action in which they could either gain FREEDOM and LIBERTY or they would face the ultimate fate as Patrick Henry famously declared – “Give Me Liberty or Give Me Death!”  I believe that to accomplish things in life there needs to be a DECLARATION which is the catalyst to propel us into action. 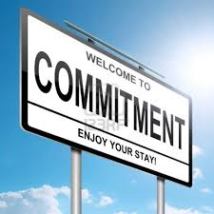 They made a COMMITMENT to securing or attempting to secure that INDEPENDENCE and knew full well that they were committing their all to the cause.  Their unshakable and total commitment was required to sell the idea to the citizens, enlist help from outside powers, and take the necessary steps to engage their overlords in a conflict that would shape the world.               They had a RESOLVE to see it through to the conclusion and felt no sacrifice was too much to gain this ultimate prize.  We saw that in the War of 1812, World Wars I & II.  It began to wane in Korea, Vietnam, and fast forward to the present and I see no clear DECLARATION being made by our leaders other than to ‘fundamentally transform America’.  I see no COMMITMENT on the part of our national leaders or in much of the local communities to the cause of LIBERTY, FREEDOM, and SAVING THE REPUBLIC.  Therefore without the DECLARATION, the COMMITMENT to the cause, there can be no RESOLVE that will endure to the end to secure the desired objective. 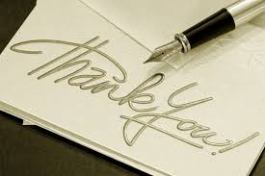 I want to express my appreciation to all my brothers and sisters who have and are serving in the military.  Without your efforts we would not be enjoying the Republic called the United States of America or the Freedom that it has afforded in recognizing our ‘unalienable rights’.  I want to thank each true patriot who tirelessly works to preserve what we have and restore the Republic to its Constitutional place.  I want to thank each one who is praying and has prayed for this nation without your efforts I shudder to think of where we might be.               I declare on this Independence Day that I am Committed to the cause of the Republic and have the Resolve to do what is required.  May God bless you and may God bless America! 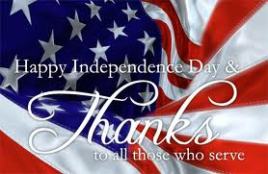