I have been wondering when it would happen and it seems that it is happening over two years before the 2016 elections. The liberal media are showing signs of turning on their Boy Wonder in the White House for their prohibitive favorite candidate Girl Wonder Clinton. They know that with her baggage she would find it difficult to win election if she was to run just as a Democrat. No, Hillary has to run ‘against’ Barack Obama’s record on many fronts to enable her to dupe people into voting for her and in so doing will strip the Establishment Republicans of Obama’s record as a political weapon. 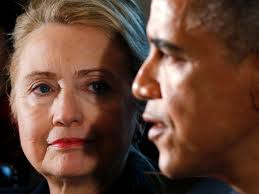 Hillary, with the help of the media, will be in a position to declare when the Republicans bring up Obama’s record that she will govern vastly different and highlight his bad policies. The problem is that many of them she not only supported but wanted to go even further when she and Libido Bill occupied the White House. The media will make Benghazi a non-topic, the Democrats will rally around that and any mention of it will result in immediate vilification as being sexist and ancient history. It will be, “What difference does that make now?” I see the machinery working now, the strategy sessions forming, and that man at her side who is one of the most astute politicians in modern history Bill Clinton working the game, spinning the spin, raking in the dollars, and rousing the troops. It is of great concern to me.

The only way to head this off is to nominate an articulate truly constitutional conservative who can challenge her claims, remind voters of her past failures, highlight her shortcomings, and refuse to be backed into a corner. That person must be a statesman/woman who like Ronald Reagan manifests enough charisma, is articulate, and disciplined enough to stay on message. The Senate, House, and White House are still winnable but it will take a shift in the power within the Republican Party to accomplish it. If the Karl Rove’s remain in control, the John McCain’s, Chris Christie’s, Jeb Bush’s, and that crowd remain in the driver’s seat we will see another milk toast candidate that will get waxed in 2016 no matter how bad Obama’s poll numbers are.

The media has long ceased to ‘report news’ and has been ‘creating news’ for a long time and that will not likely change in the next two years. The love fest they had for and with Obama will be transferred to Hillary and Obama will become as outdated as last year’s fashions. I don’t know how this is going to play out for people like Al Sharpton, Jesse Jackson, and those of that ilk and could cause a rift that divides the party but not likely. I truly believe that the Democrats will become more energized in the next few months and by the time 2016 arrives they will be tuned into what the media is selling, drinking the Kool-Aid, and believing the fear mongering that the Republicans are going to return blacks to slavery, women to being barefooted and pregnant without the right to vote, and things of that nature. It will be lies, lies, and more lies but what would be new about that?

I am praying that God move on the heart of a candidate that all factions of the Republican Party, Conservatives, Constitutionalist, and even Libertarians can view as a supportable candidate. I pray that the person garner enough grassroots support that the Ruling Class Elitist of the Party dethroned. I pray that the person demonstrate integrity, have enough oratorical ability to communicate the message of America, and disciplined enough to stay on point. I am praying for America and believe that if Hillary or any Democrat wins election as President in 2016 America as we know it is finished and may be anyway. Therefore I cannot let up for one minute and must pray, speak, write, give, and work to see our Constitutional Republic restored and the Elitist Oligarchy demolished.

May God guard and guide you and may He bless America again!