We are informed by many that we must be respectful and tolerant of the followers of Islam’s religious stance concerning cartoons or references to their prophet Muhammad.  Those who declare and demand that demand it selectively but have a significant double standard when it comes to respecting the beliefs of the followers of Christ.  I find that difficult to rationalize.

Muslim’s want Shira Law imposed on everyone and often the jihadist are painted as victims rather than purveyors of their brand of religious intolerance.  Anyone who speaks against the terrorism, abuse and murder at their hands are labeled as ‘haters’, ‘Islamaphobes’ or ‘racist’.  The same goes for anyone criticizing anyone of color especially the current president, Attorney General or any public figure who is non-white.  Yet, the left can attack Christian beliefs vehemently, call conservatives all kinds of vile names, slander their character and brand them evil.  The double standard is glaring and I cannot imagine anyone not seeing it so I must conclude that it is excused and deemed desirable to launch assaults on Christianity and Constitutional Conservatism.

We are supposed to be careful not to offend the Muslim’s regarding their prophet but it is open season on corporations or individuals who take a religious stance regarding abortion, same sex marriages, etc.  That is quite a double standard.  My immediate question in this is:  “If it is considered reprehensible, bigoted, homophobic and/or racist for Christians to stand against homosexuality, same sex marriage, abortion, etc. why are the Muslims not also condemned for their opposition to homosexuality?”  In the Muslim world child abuse and physical abuse of women is acceptable but were that practiced by Christians it would be condemned.  It seems there is selective tolerance and condemnation practiced.

I would argue that it is not about ‘equality’ or ‘tolerance’ but a political tool to gain Democrat control in Congress and the White House.  The media supports this narrative and agenda as do an alarming number of religious leaders and institutions.  In the world of Islam there is no uniformity in interpretation of their book nor is there in the world of Christianity.  However all Muslims agree in the demand of tolerating their beliefs without consent for other faiths to express their beliefs.  In Muslim countries it is illegal to proselytize and anyone preaching Christ or Judaism could and likely would be jailed or executed.

This administration finds it impossible or distasteful to identify ISIS or other Islamic jihadist and terrorist as Islamic but finds it easy and palatable to castigate Christians over the centuries old Crusades.  Islam is intolerant but demands that everyone be tolerant toward them much like the Progressives and Liberals want to exercise their freedom of speech but censor anyone with an opposing view.  The double standard is incredible. 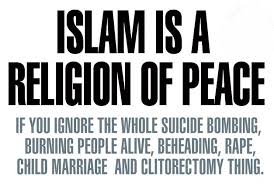 I may or may not agree with some actions by those who are defending and exercising their right of Freedom of Speech but I defend their right to exercise that right without fear of a terrorist assault as was in Garland, Texas or Charlie Hebdo in France.  It is one thing to picket, boycott or protest peaceably and quite another to launch an attack in a hail of bullets.  That should be condemned immediately and uniformly by all including those who claim to be Moderate Muslims.  If Islam is a religion of peace then where is the outcry against the violence, murder and mayhem?  If Islam is a religion based on love where is the demonstration of tolerance toward people who hold a differing religious point of view.

The vileness that comes from the jihadist, terrorist and activist on the left promoting things that are diametrically opposite of most Christians is reprehensible.  If anyone on the Right were to adopt the tactics used by the Islamic jihadist, terrorist and activist I would call it reprehensible as well.  The First Amendment belongs to everyone who is a legal American citizen.  Non-citizens in other countries of the world enjoy NO RIGHTS but expect to be afforded the rights, privileges and protection of our American Constitution.  That is a double standard and the left exercises it so long as is it politically expedient for their cause.

America it is time to wake up, stand up and speak up in support of the Constitution of these United States of America.  We must demand our country back.  God help us see the Republic restored.   May God bless you and God bless America!