I don’t know about you but I have found that some of the most volatile topics of conversation, even among friends are RELIGION and POLITICS.  Of course, I could add ‘sports’ to that list but that, in my experience, it is not nearly so caustic as the other two.  I have found that people who are normally reasonably even-keeled and even passive about many things can become aggressively hostile with either of those two topics are brought to the table.  People who claim to be ‘tolerant’ and ‘open-minded’ will, often, become so closed minded the light of day could not enter their minds.  I have found this to be incredibly true in this present political cycle where the choices are an extreme leftist, liberal, progressive, socialist Democrat and an often caustic Republican, third party or not voting at all.  The undecided segment seems to me to be decided even when they argue they are not!

I have been ‘unfriended’ more times on Facebook because of my political views this year than all previous years combined on this medium.  I have also been given the ‘left foot of fellowship’ over my religious views especially when I connect them to my political views.  There are some who have informed me that “Religion and Politics” are like ‘oil and water’ they cannot and should not be mixed.  They argue that one’s ‘religious or spiritual life’ should be totally separate from their ‘political life’.  The rub comes when I challenge or question that position for how can I divest myself of what I believe for it determines who I am.  My religion defines my worldview and shapes my politics and politics affects every area of life so both are incredibly important, in my view.

I have some current and former friends who have been and some still are, irate with me because I declare that I believe the most principled thing I can do in this election is STOP HILLARY CLINTON.  That flies in the face of their position that ‘voting for the lesser of two evils is still voting for evil.’  When I attempt to bring to the table for consideration the stance of Hillary Clinton and the willingness and participation of the Leftist Democrats to wage war on Christianity they become angry.  We are witnessing a genuine War on Christianity and that can be documented in numerous ways with specific examples.

How about the irony of a black Christian named Kelvin Cochran that Barack Obama appointed to head the National Fire Administration?  The mayor of Atlanta requested that Mr. Cochran return to his hometown and rebuild the Fire Department.  Mr. Cochran accepted and when the city council reviewed his biblical view of marriage they fired him on the spot.  How about the Cal State intern being terminated and threatened with expulsion from the graduate program for discussing her faith PRIVATELY!  Then, who could forget the assault on businesses for standing by religious convictions regarding ‘same-sex marriages’ or the 5 Houston pastors who voiced, publicly, their views that were contrary to the PC crowd’s demands and the LGBT agenda?  The mayor of Houston had the city issued subpoenas demanding the sermons of pastors that dealt with homosexuality, gender identity and the like.  If they failed to comply they would be held in contempt of court.  Thankfully that failed but it was a ‘test case’ issue and had the leftist been successful what would have been next and what will be next?

If Hillary Clinton is at the helm of the Ship of State there is no question she will steer the course for a direct assault on Christianity, the Bible, and our Constitutional liberties and rights.  The danger in allowing her to become president extends beyond that issue but to every issue that is critical to our Constitutional Freedom.  Examine how the Republicans have cowered away for any serious confrontation with Barack Obama because they feared the outcry from the media and Democrats in opposing the ‘First Black President.’  Imagine what they would do with the “First Woman or Female President?”  She would, as Mr. Obama has, enjoy a virtual blank check to continue her assault on our religious liberties and constitutional guarantees of Freedom of Religion as well as other rights.

Our present government and bureaucracies, as well as some local governments, have taken serious steps to open the door to Sharia Law and protecting the religious as well as political rights of the followers of Islam.  They take no such pains regarding Christianity but when it comes to protecting and defending Muslims they are front and center with a vengeance.  It is a genuine and valid concern that if Hillary Clinton becomes the 45th President of the United States we will see the door that is now cracked open, flung wide for Sharia Law to become prevalent in this nation.  CAN YOU ACCEPT THAT?  Remember that Loretta Lynch the Attorney General has vowed to prosecute anyone speaking badly of Islam.  There is no such promise regarding anyone speaking badly of Christ or Christianity.  So you decide if my concerns have any validity.

My argument is that I or we must STOP HILLARY and the Leftist from winning in November and while some insist that voting for Donald Trump would be a violation of principle and they will refuse and some have even said they will vote for Hillary.  I do believe that the most principled thing I can do, in the interest of Freedom and Liberty is to VOTE AGAINST HILLARY CLINTON and the best way I see of stopping her is to VOTE FOR DONALD TRUMP.  Remember it was Hillary Clinton that declared that “it takes a village to raise a child.”  She has expressed and demonstrated a view that the government knows better than parents and churches how to properly train our children.  She is willing to see our children taken from us in order to properly (her view) train them so they will be better able to function in her envisioned society. 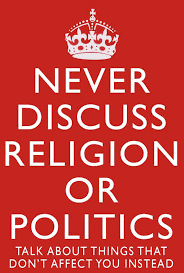 Yes, I am one of the 70% of Americans who have experienced the worst in people and the 7% who have lost friends because of my views.  I’m sorry if my willingness and sense of the need to discuss both ‘Religion and Politics’ is offensive to you.  Turn me off, ignore me, refuse to talk to me if you please but I plead with you to consider the real dangers in allowing Hillary Clinton to occupy the White House and Oval Office as Commander in Chief.  For the record, I am more concerned about honoring the King of Kings than who is President of the United States but I also believe that I have a directive from God to “warn of wickedness” and that if I know to do good and fail to do it I have sinned!  I seek God first and speak that which I see and hear to warn people to feel the destruction coming because not all acknowledge God and if this train of destruction reaches its destination they may not have the opportunity to hear the gospel.  Therefore I firmly stand for FAITH, FAMILY, and FREEDOM!

RECOMMENDATION:  At the risk of sounding self-serving I’d like to encourage everyone to tune in http://www.bpnradio.com and hear both inspirational messages, calls to prayer, ways to pray, and information regarding where we are today.  My friend Dale Gentry began this ministry a number of years ago and has graciously included me in the ministry.  I host a weekly broadcast at 1:00 and 7:00 PM each Tuesday, entitled “Discerning the Times Watch.”  I also have a daily spot, Monday through Friday at 11:55 AM.  This spot is 5 minutes in length and entitled, “A Word From The Wall.”  I encourage you to tune in and check out the ministry of Dale Gentry and a host of others.  God bless you and thank you for allowing me to insert this commercial or recommendation.