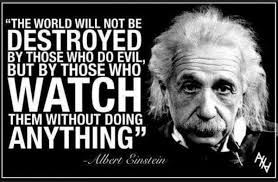 I know that my title is an incomplete sentence but hopefully it will serve as a catalyst for us to consider what happens when Good People will not serve, will not speak out and speak up.  There is a quote that has surfaced in various forms and attributed to Thomas Jefferson, Edmund Burke and others regarding the foothold of tyranny being birthed in the silence and inactivity of good people.  Although I am unable to fully determine who said it first and what it looked like in its first form, it’s truth and importance is not debatable.

John F. Kennedy offered a quote that he attributed to Burke, “The only thing necessary for the triumph of evil is that good men do nothing.”  In examining first mentions, I discovered that a similar statement was made in 1916 by Reverend Charles F. Aked as he called for restrictions on alcohol saying, “It has been said that for evil men to accomplish their purpose it is only necessary that good men should do nothing.”  In 1770 Edmund Burke wrote of the need for good men to oppose the cabals of bad men and in that quote, is quite possibly the source of the aforementioned quote.  He said, “No man, who is not inflamed by vain-glory into enthusiasm, can flatter himself that his single, unsupported, desultory, unsystematic endeavors are of power to defeat the subtle designs and united Cabals of ambitious citizens. When bad men combine, the good must associate; else they will fall, one by one, an unpitied sacrifice in a contemptible struggle.”  In 1867 the British philosopher and political theorist John Stuart Mill delivered an inaugural address at the University of St. Andrews and the second sentence expresses that same sentiment, “Let not any one pacify his conscience by the delusion that he can do no harm if he takes no part, and forms no opinion. Bad men need nothing more to compass their ends than that good men should look on and do nothing.”  A statement of Burke that is germane and should resonate was, “When bad men combine, good men must organize.”

I draw an analogy from the Bible that can be applied to our present situation in America and government.  When Gideon died, Abimelech sought to become the new ruler.  He made incredible promises, used bribes, and surrounded himself with ‘worthless and reckless fellows’.  One of Gideon’s sons described the situation using a parable found in Judges 9:8-15.  In that parable, I take note of three things that are of interest.  The Trees of the forest attempted to get the best and most productive of them to be their ruler. They went to the olive tree, the fig tree, and the grape-producing vine but each of them offered an excuse for not serving.  After none of the good trees would assume the role of leader the bramble or thorn bush became the leader by default.  It cannot be missed that when good and qualified people refuse to do good we are stuck with the inferior or bad rulers.  With the thorn bush as ruler the trees were left with two choices and neither of them could be called good.  The call was “come and take refuge in my shade” but sitting under the shade of the thorn bush is anything but pleasant and living under the rule of a bad ruler is never good.  The warning was, “if don’t submit to me, I will use punitive measures to punish you.”  DOES THAT RESONATE?  DOES THAT SOUND FAMILIAR?  Recall the past few years in our nation and how we have suffered under punitive measures anytime we resisted the desire of the Leftist Administration.

One of the major reason politics becomes corrupt is the absence of good people. It is the absence of principle, ethics, and morality.  If competent, God-fearing people refuse to participate over a period of time, politics becomes incredibly corrupt and people will argue, “I can’t get into politics because it is so corrupt.”  NO, that is exactly why we need good people in politics.  What are the qualifications of Good Candidates?  Let me once again go to the Bible in Exodus 18:21, where we are told to, “…select out of all the people able men who fear God, men of truth, those who hate dishonest gain; and you shall place these over them as leaders of thousands, if hundreds, of fifties, and of tens…”

The Candidate must be AN ABLE PERSON.  A person who is competent for there is nothing worse than having an incompetent person in charge.  Second, he must FEAR GOD and have a personal relationship with God for out of that relationships flows integrity, morality, and ethical behavior.  Third it is necessary that he LOVE TRUTH, otherwise he will be closed minded, immovable in his ideology and unrelenting in his agenda.  Fourth, he must HATE DISHONEST GAIN.  He not only rejects fraud but the perks that come through the Ole Boy System of Washington and Cronyism.  If the individual demonstrates those four qualifications he/she is a candidate for leadership and a deterrent to corrupt politics.  This is the answer to stopping tyranny.

America, we are in the condition we are today largely because good people have been silent and uninvolved.  Freedom cannot be preserved if good people sit silent and allow evil to advance its agenda.  Politics may be a dirty business and filled with corruption but that cannot be a reason, excuse, or justification for good people to sit on the sidelines.  There are times that it is not enough to contribute to candidates, vote or pray but when we must throw our hats in the ring and get into the fight on the frontlines.  America as the Constitutional Republic established by the founders and fought for by the founders cannot survive if GOOD PEOPLE SIT SILENT and DO NOTHING.  Evil never rests and neither can good.  Those of us who love freedom, are true patriots, and defenders of the Constitutional Republic of our Founders and Framers MUST commit to involvement.  That may be SPEAKING OUT and SPEAKING UP.  It assuredly means PRAYER but could also mean that we must become candidates ourselves.  I am praying for you and me that we will become willing to do whatever is required to preserve the Republic.

God, bless you richly is my desire and prayer!