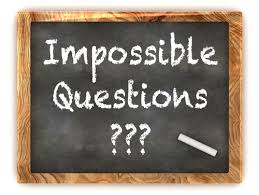 The Main Stream Media, the Democrats, Leftist, and Activist that are opposed to everything on the Right know how to ask the questions which will, in their minds, prove their point.  It reminds me of my Ordination interview when one of the preachers on the panel asked tried to be funny and asked an impossible question.  He said, “I am going to ask you a Yes or No question.”  I suspected a rat and said, “Okay.”  He asked, “Are you still beating your wife?”  Remember this was to be a Yes or No question and regardless of how you answered that question under those guidelines you were in hot water.  I hesitated a moment and watched the snickering and sly smiles on the faces of the entire panel.  I looked up and said, “I know that was meant to be funny but it is a question designed to embarrass me and therefore I answer it this way, I am not nor have I ever engaged in that kind of behavior.”  His face clouded because I took his fun, at my expense away from him.  That is what is happening to Donald Trump and virtually all conservatives today by the media.

The media asked Donald Trump if he would denounce David Duke and the KKK in the Primaries and during the campaign as many as 15-20 times and each time he denounced them.  He even did so years prior to becoming a candidate.  They did not listen and continue to ask the question for the purpose of framing in the minds of those listening that Trump had not or was reluctant to denounce Racism.  They did not care what he had said in the past and by asking the question again, they believed they would achieve their goal of painting him a racist.  They were right for many.  Today, I hear people recite the talking points of the Left and claim that Trump is pro-white supremacy and therefore racist.  In the Charlottesville situation, he denounced racism and rightly identified that there was violence on both sides.  That, to the Left, is blasphemy because there cannot be violence or racism among those on the Left.  They are evening attempting to relate the Antifa protesters who came in with bats and clubs as being like the WWII soldiers who resisted the Nazis in Germany.  Seriously?  If you believe that nothing I can say will help you remove the veil over your eyes, so I will just shake my head and move.

CBS spent an entire day where there was nothing on the news except the Charlottesville story and largely directed at Donald Trump and their claim that he refused to condemn the supremacist.  They went and found three women who were Trump supporters, two black women, and one white.  All three shattered their narrative and reaffirmed their support for Trump and rejected the claims of racism by the media.  CBS was shocked because they like the rest of the liberal media do not believe that anyone exists that thinks rationally and sees through the false narrative of the Left.  Of course, they were able to find some ‘so-called’ Republicans who would sign on to the racism claim and denounce the Republican Party as being the Party of Segregation and Racism.  History does not support their claims and those claiming to be conservative and Republican were seeking an “Atta boy” from the Media and their moment before the camera nationally.   Everything President Trump does from the pardon of Sheriff Joe to the ending DACA that Obama had illegally and unconstitutionally put in place is considered a sign of racism and an endorsement of bigoted and racist views.  Facts and truth are unimportant to them for those get in the way of their narrative and agenda.

On June 12, 1936, President Franklin D. Roosevelt, at the unveiling of the Robert E. Lee Memorial Statue, in Dallas, Texas made an interesting statement.  He said, “I am very happy to take part in the unveiling of the statue of General Robert E. Lee.  All over the United States, we recognize him as a great leader of men, a great general.  But, also, all over the United States I believe that we recognize him as something much more important than that.  We recognize Robert E. Lee as one of our greatest American Christians and one of our greatest American gentlemen.”  Hold the Fort!  Does that mean that the Antifa crowd and the Leftist Media will now go after FDR and demand that he be purged from history as well?

Hamilton star, Leslie Odom, Jr. is in favor of taking down statues of both Washington and Jefferson because, after all, they were as Barack Obama said, evil White men and they owned slaves.  It does not matter what they did to try to set the stage for the eradication of that blight on our society and nation.  No, their crimes were that they owned slaves and were white males, therefore they are vile and history must not mention them again.  He is joined by many others on the left including a Chicago pastor who wants the name of parks in Chicago to be changed from Washington and Jackson because they are offensive and symbolize racism.  WHERE DOES IT END?

How many are taught that White Nationalism had its roots in the Democratic Party in the Post War South and the KKK was founded by Democrats and the late Senator Robert Byrd was a member of that organization?  Senator Byrd was once elected a top officer – the Exalted Cyclops, whatever that might be in his local Klan unit in the early 1940’s.  He once vowed to never fight in the military with “race mongrels” or “with a Negro by my side.”  Hillary Clinton called him her friend and mentor.  Are they going to go after the statues of Senator Byrd?  Senators Al Gore, Sr. and J. William Fulbright, a man that Bill Clinton dedicated a memorial voted against the Civil Rights Act.  Senator Byrd has the distinction of being the only senator to vote against the only two black Supreme Court Nominees, Thurgood Marshall and Clarence Thomas and led a 52-day filibuster against civil rights legislation.  DEMOCRATS have been at the forefront of opposing legislation designed to help blacks.  They have not led the charge to free the slaves, as did Lincoln’s Republicans and have resisted time and again to keep segregation alive.

Donald Trump honestly identified that there was blame on both sides in Charlottesville, unlike Barack Obama who quickly stepped up to castigate the police wrongly and defend Black Lives Matter when they were wrong.  Obama fanned the flames of racism and targeting the police at a memorial for slain police officers.  WHO IS THE RACIST?  WHO IS FANNING THE FLAMES OF DISCORD?  President Donald Trump can answer the question honestly and clearly denounce racism of all kinds but because he is the hated enemy the MSM, the Leftist, Activist, Democrats, and Never Trump Republicans are selectively deaf.  It is a situation where no matter what he says, HE IS CONDEMNED.  I pray that those of us who want what was promised in the campaign and want to see America restored to her rightful constitutional status, the Deep State defeated, and the Swamp drained will not be swayed by the rhetoric and false accusations of the media.  You can accuse me of being a Trump apologist if you choose but what I am an apologist for is TRUTH and what is being reported is not the truth.