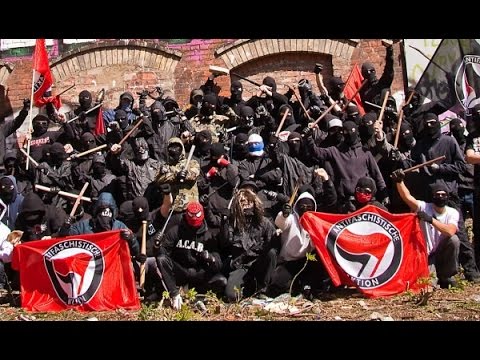 The Leftist, MSM, Democrats, Activist, and some Republicans would have us believe that the ANTIFA Protesters are peaceful and justified in their actions.  The logic behind that is beyond comprehension but still, that is what we are told.  If you object to their violence and call them what they are, terrorist, you are branded as racist or some other colorful descriptive term meant to be derogatory and demeaning.  If you opposed Barack Obama you were a racist and if you support Donald Trump you are a racist, so they claim.

Let me ask, “If you cover your faces, dress in black like ISIS, carry baseball bats, clubs, knives, and/or guns in your protests are you truly seeking peace or presenting a valid representation of peacefulness?”  If someone comes at me with a baseball bat having their faces covered and dressed like an ISIS jihadist, I cannot be condemned for assuming their intent is other than peaceful.  If they come at me dressed and armed in that manner shouting filthy epithets in a vitriolic manner, I cannot be condemned for rightly assuming they intend to inflict bodily harm if not death.  Therefore, according to all laws of reason and self-defense, I would be justified in using whatever force necessary to protect myself, my possessions, and my family.  PEACEFUL is not a thought that comes to mind when I see these ANTIFA Protesters marching, shouting, beating, and inflicting harm and damage.  I see HATE, hear HATE, and find no ground upon which to build a healthy reasonable discussion for if you disagree they attempt to shout you down and then attack inflicting bodily harm. THAT IS TERRORISM.

If you who ascribe to the arguments of the Leftist and those protesting and your objective is, supposedly, to right the wrongs of society surely you realize that threatening and being violent will have the opposite effect.  If I come at me shouting angrily, covering my face, and waving your baseball bat and making threats, what reasonable person would expect me to consent to your demands and convert to your way of thinking?  You may force people, through terrorism, to submit momentarily but you have done nothing to change the hearts and will encourage those opposing your position to unify and meet your protests with equal solidarity and force.  I am convinced that the powers behind those protests do now seek unification but violence.  I believe they desire to create an even greater chasm between segments of society and ethnicities for political purposes with the ultimate intent being CONTROL.

There have been wrongs in our American history and society in the past, present, and will continue into the future.  You may be successful in gaining standing in the Congress and in the Courts to enact Politically Correct Laws that embrace your views but will that solve the problems you believe exist?  NO!  It will further divide and fan the embers of distrust which will begin to burn in anger and erupt in hate leaving bloodshed the only option in the minds of many.  That is the most tragic end of this scenario but one that is becoming increasingly likely because of the cowardice of Congress, the Courts, the MSM, Democrats, and Republicans to acknowledge what the FBI, NSA, and Homeland did years earlier – The ANTIFA Protesters are Domestic Terrorist.  No, I am not justifying the KKK, White Supremacists, or any group that hates another based on ethnicity or skin color.   I am asserting that we cannot ignore the violence and damage being inflicted by these protesters and should condemn the violence and hate that is being presented and demonstrated.

Even some of the leading Democrats have acknowledged that the ANTIFA Protesters are doing bad things and some of them are bad people.  Donald Trump was right when he said there was blame on both sides.  No, I will not give anyone a free pass based on some atrocities of the past.  Each person is responsible for their actions and must be held accountable for their choices in life.  One former Republican and member of the Reagan and the elder Bush’s administrations has tweeted that Donald Trump’s repealing Barack Obama’s unconstitutional DACA Plan confirms that all Trump supporters are racist.  He went on to say, “If you don’t like it, (blank you).  How professional and tolerant this former member of the Reagan team is in that kind of language and divisiveness.  That will help bring all parties to the table and discuss concerns that all sides hold, won’t it?  YOU KNOW THE ANSWER TO THAT.

When public officials order the police to stand down and the police administration demonstrate they do not have the intestinal fortitude to disregard any order that endangers the public we encourage lawlessness and anarchy.  If the objective is a second civil war in America, then that plan will achieve its desired end.  If the objective, as stated by some, is to resolve differences then we need to enforce the law, leave the face coverings at home as well as the clubs and bats and have an honest open debate on the issues.  America’s wounds can be healed but only through a return to God and retention or return to our moral moorings and constitutional foundations.  Just because someone disagrees with your position or desired objective does not make them a lesser class of citizen.  I will defend everyone’s 1st Amendment Rights but also insist they express those views in a peaceful manner.

If you hide your face, dress like an ISIS jihadist, and carry a baseball bat I will not attempt to engage you in peaceful conversation.  I will stand my ground and defend my life, family, and property as is my God-given and Constitutional Right.  Call me whatever you please but violence is not the solution and does not make your cause more righteous.  If you don’t want to be called a TERRORIST stop engaging in TERRORISM.