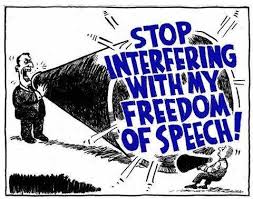 The First Amendment to the United States Constitution says, “Congress shall make no law respecting an establishment of religion, or prohibiting the free exercise thereof; or abridging the freedom of speech, or of the press; or the right of the people peaceably to assemble, and to petition the Government for a redress of grievances.”  Can I ask you Leftist, Snowflakes, ANTIFA, BLM, Democrats, Hollywood Elites, and anyone else who wants to usurp and suppress that right WHERE and I emphasize WHERE DOES IT SAY “APPROVED” SPEECH?  Just in case you cannot decipher the words in the first amendment IT DOES NOT.  It says plainly “Freedom of Speech” and that includes ALL speech.  It does not matter to the Constitution whether you like it, agree with it, or approve it everyone has or is supposed to have Freedom of Speech.

Although it does not specifically say it, Freedom of Speech would imply Freedom of Thought too.  I know that is troubling to the Snowflakes, Leftist, Democrats, ANTIFA, BLM, and Hollywood but God created us with the ability to THINK and that is exactly what we should be doing.  Rather than parroting the authorized soundbites why not use some cognitive reasoning and THINK.  Examine the facts, consider the consequences of what you say and do not say and become a defender of the Constitution.  I know that would be virtually impossible for those on the Left as expressed by Twitter co-founder Evan Williams as he declared, “I thought once that everybody could speak freely and exchange information and ideas, the world would be a better place, I was wrong about that.”  He and many on the Left are joining the “Approved Speech” definition of Free Speech rather than the Constitution’s wording.

But who determines what is “Approved Speech”?  Ah, there is the rub because if you say anything deemed wrong by the Leftist and offend one of the Snowflakes, the Southern Poverty Law Center (SPLC) will immediately brand you a “hatemonger”, “racist”, “bigot”, or one who suffers from some phobia.  The Left will seek to destroy you not simply censor or silence you but destroy you.  I often wonder what our Framers and Founders such as Jefferson, Adams, Franklin, Washington, and Madison would say about what is happening today in the out of control political correctness that has permeated our society.  I think I know because I have read and studied the Constitution, the Federalist Papers, and read many of their writings.  They believed, I am convinced, that Freedom of Speech, Freedom of Press, and Freedom of Religion were cornerstones for our Republic and its long-term success and survival.

Today, we not only have the federal government with its nose in every facet of our business we have the activist, leftist, liberals, snowflakes, and other groups doing so as well.  They somehow seem to believe that it is their right and duty to monitor ALL SPEECH and anything that is deemed UNAPPROVED, by their definition and ideology, is to be banned.  Where does that end?  At what point do they determine they have stifled our Constitutional Rights enough and leave us alone?  I can answer that in one word, NEVER!  When a segment of our society is allowed to engage in violence and call it Freedom of Expression as part of their First Amendment Rights in attacking anything that disagrees we are up the proverbial creek without a paddle and the smell is growing more noxious all the time.

The Leftist are not satisfied in targeting SPEECH they want to control THOUGHT as well.  Exactly how they are going to accomplish that is somewhat a mystery but to them Unapproved Thought is VIOLENCE and if they think we are thinking wrongly they feel justified in attacking us physically, politically, financially, and in any other way possible.  After all, we engaged in UNAPPROVED THINKING and that is a very serious crime, at least to the snowflakes of our society.  How is it even remotely reasonable to declare that anyone saying, “All Lives Matter” is hate-speech and is an act of violence thereby justifying a counter attack of violence by ANTIFA, BLM, or any other Leftist group?

If we spoke against anything Barack Obama did or said, we were subjected to violence and certainly could expect to be branded as someone awful and a person to be shunned and destroyed.  Today, you are permitted to say anything you desire about Donald Trump, even calling for his murder, the rape of his wife and daughters, and as one famous chef said, “I’d poison him” yet nothing is done.  Those people are not charged with a crime, denounced by the Left and sadly by too few on the Right and are often praised as being heroes or patriots.  HOW IS THAT POSSIBLE?

A NPR/PBS News Hour/Marist poll reported that 62% thought the Confederate statues, should remain, while only 27% believed they should be removed and even among blacks there was a 44% plurality saying leave them alone.  Yet, the government, city councils, ANTIFA, BLM, SPLC, and other groups are demanding they be taken down.  Here in Texas they are taking them down, renaming schools, and claiming there is an overwhelming outcry for that action.  Yet, poll after poll indicates that is a fabrication and distortion of the truth.  I guess the “squeaky” wheel does get the grease, but I suspect it is the Leftist in power in those cities and on those school boards who are taking advantage of an opportunity to please the Snowflakes.  Some of them are simply cowards thinking if they do this the Left and MSM will love them.  But where does it end?  What is going to be deemed UNACCEPTABLE next?

As an America, a Vietnam veteran, a patriot, a Christian, and a lover of Freedom and a defender of the Constitution I WILL NOT SUCCUMB to the unconstitutional and immoral demands that I adopt the PC version of Accepted Speech.  I do not mean to disrespect anyone or their right to say or believe what they believe but I will not sit silently while my faith and my nation are under siege from Marxist, Socialist, Communist, Leftist views.  I will continue to call for reason.  Let me stir the pot a bit more and ask, “If we are going to allow the removal of all things connected to the Confederacy claiming it is disconcerting to a segment of society, a symbol of racism, and an inducement for violence are we also going to remove the statues of the Leftist?”  If the answer is no, why not?  Do they not offend a segment of society?  Do they not inflame the rhetoric and thereby are a possible catalyst for violent behavior?  Do some not consider them racist and a symbol of the suppression of Constitutional Rights?  I am not saying they are or are not any more than I say that about the Confederate Statues but if we are going to sanitize our society and history, let’s go all the way and let all the schools be called “Schools” with no name because any name you find will offend someone.  America, we must stop this insanity and return to following and interpreting the Constitution as it was written and intended otherwise we doom the Republic.  I CANNOT PASSIVELY WATCH MY NATION DESTROYED.

God, bless you and God bless America and I pray that you will wake up, stand up, speak up, and step up becoming involved in the restoration and preservation of the Republic we were given.