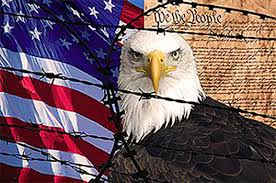 That is a question that could entertain almost an endless litany of responses and I will not and could not cover all the possibilities.  However, I am sensing, seeing, and have concerns about a number of surface things that, in my view, are simply the tips of the icebergs.  I have become convinced that a large percentage of those engaged in various activist activities and protest groups do not truly comprehend what they are fighting for or against.  They know the talking points, but most have not invested any or little cogitative reason for the motives and foundational agenda of those promoting those causes.  Therefore, they, frequently become nothing more than the rats following the pied piper or lemmings following their leader.  They are following a path that will lead to their own destruction but cannot see the forest for the trees or reality beyond their pent-up anger.  That is cause for concern!

No, I do not have a crystal ball, but I do pray to the God of all creation and I observe, study, question, and seek to connect the dots as much as possible.  Almost from the beginning of the candidacy of Donald J. Trump, there has been an almost neurotic drive to destroy him.  I have become convinced that those who are Constitutional Conservatives, or Republicans who have staunchly dug their heels in the sand and said NEVER TRUMP often fail to see the ultimate damage done to our Republic if they succeed in ousting him, disgracing him, and shaming him.  You may vehemently disagree but if we allow this kind of non-stop “investigation” to thrive and survive against a president not of our liking, what is to prevent similar action against one we support?  If we allow elections to be overturned based on our personal preferences or dislikes of an individual without considering the alternatives and possibilities we are plunging headlong into the abyss of “fundamental transformation” that Barack Obama desired.

I believe it goes far beyond dislike of Donald Trump, and the belief that he is unqualified because for whatever reason and should be ousted.  I believe there is a concerted effort to erode the foundations of our society and destroy key pillars that have helped us remain strong and viable as a Republic.  If you take July 4, 1776, we are 241 years old as a Republic.  If you use the date of the ratification of the U.S. Constitution on July 21, 1788, we are younger than that but significantly over 200 years old as a Republic.  There were core pillars in our makeup as a society when the Revolution began, still in place when the Constitution was ratified and have been perpetuated into the 20th Century.  Some of those pillars are under assault today and the erosion is causing our Republic to teeter on the brink of destruction.

Before, you attempt to castigate me over that statement I ask you to consider with me a non-discussed possibility of a foundational motive for the myriad of sexual allegations against men today.  If it were simply, allegations against particular politicians, attempting to keep them out of office I would not advance my concern.  Since it, the allegations not only attack a few conservative politicians, but the net has been thrown on the Hollywood Liberal Elitist, MSM advocates, Democrats, and a few Republicans it is more than political.  I also believe it is more than a genuine concern for women’s rights and the protection of women, although that would be a most noble cause.  It is my belief that the diabolical strategy birthed out of Hell itself is to so tarnish the image of the male that he is discredited as a role model.  I believe this is an attack on the Family and Traditional Marriage, for if the male is so discredited and vilified he cannot serve as the Head of His Household in any fashion.  Before you go off regarding that title, I believe it is a biblical one and the one thing that has helped hold us together as a society among all ethnicities has been a two-parent household with a strong father figure in the home.  If these allegations are voiced frequently enough and believed by enough people, the male’s role in society will be dramatically diminished.  Hey Guys, those of you who are guilty, you are a problem and your behavior is unacceptable.  I am not defending the actions charged but always contend that anyone must be “innocent until proven guilty”.  We would want that for ourselves and we should offer it to others.

I see activities that are frontal and backdoor assaults on Christianity and that largely began with the idea of “separation of church and state” as meaning that nothing of God, the Bible or faith could be involved in the public arena.  Our founders were determined to prevent the government from establishing a national church as existed and exists in other nations.  They wanted our individual and inalienable rights to be protected and preserved.  They began their deliberations with prayer.  They quoted passages from the Bible.  They desired the Bible to be part of the curriculum in public education.  They valued the input and influence of the clergy of their day.  They were not anti-God of anti-Bible but anti an all-controlling government that also controlled religion.

The class warfare is an attempt to erode our foundational view of free enterprise and capitalism where any individual has the possibility of rising to the top financially. The ethnic or racial divide is designed to divide us so that we cannot withstand the incremental denying of our rights and empower the government more and more.  This divide is also an attack on Christianity because the Bible teaches that we are all created by God and descendants of Adam, therefore, members of the same race – THE HUMAN RACE.  If we could get beyond skin color or other ethnicity descriptors and become HUMAN BEINGS, we could resolve our racial differences without losing our Republic.

I see the undercurrent and unseen in the visible and am deeply concerned for my nation.  That is why I continue to call for those who pray to PRAY, PRAY, PRAY.  I also call for every lover of freedom to become involved.