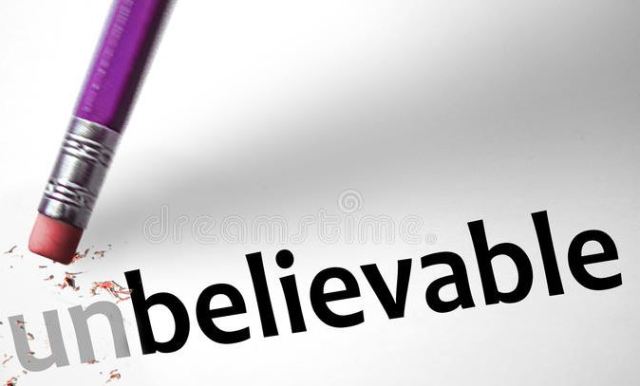 The simple and straightforward answer should be NO!  However, with the evolution of the social conscience and political correctness of today’s society, it seems to be “Depends on Who Is Saying It.”  What I mean by that it that with the 24/7/365 barrage of misinformation, partial information, selective information, and faux news presented by the Main Stream Media outlets many seem to be easily or willingly duped.  The MSM, the Leftist, Liberals, Progressives, Politicians especially the Democrats seem to have learned that many believe there is believability in the unbelievable they present.  Are they correct?  It would seem so with the continued protests, public statements of outrage, and the never-ending attempt to overturn the 2016 Election and oust President Trump from office.   Rush Limbaugh calls those who buy the rhetoric, “low information voters” and I would agree that it is assuredly “limited information” and “almost non-existent use of cognitive reason.”  It seems, that if the MSM or the select outlets followed by the Left and the Democrats say it, to those people it needs no examination and is embraced without vetting as truth and repeated even in the face of unavoidable facts.  To them, there is believability in the unbelievable and that is problematic for the Republic.

There are those who can be called nothing less than “Race Baiters” and their overt actions, statements, and diatribe target emotions, distrust, and fan the flames of racial discord.  WHY?  It is my view and many black Americans agree that the purpose of those individuals is not the betterment of race relations or the advancement of the black community but POWER, POSITION, and PURSE.  The Democrats, as highlighted by Lyndon B. Johnson, discovered that if they kept the blacks in a needy state, provided them entitlements, and fanned their distrust of whites, they could lock in guaranteed Democrat votes in virtually every election.  I know many who are waking up and realizing that the Democrats are engaged in an attempt to enforce economic slavery upon people of color and many on the lower end of the economic spectrum.  It is Unbelievable that anyone would Believe the actions of the Liberal Leftists are in the best interest of blacks, women, or virtually any other group, but many believe the unbelievable and VOTE DEMOCRAT without viewing the Big Picture.

The Democrats have used governmental agencies to target conservatives and conservative groups illegally and there is no outrage.  I’ve even heard some say, “Well, that’s just politics.”  But when President Trump or any Conservative makes a statement or takes an action that is contrary to the Liberal Cause they CRY FOUL, demand an INVESTIGATION insisting those Republicans are worse than Genghis Kahn or Lucifer himself.  Barack Obama traded FIVE Taliban Leaders for a Deserter and that was deemed righteous and in the best interest of America and World Relations, but President Trump wants to secure our border and he is racist, phobic, and the incarnation of evil worthy of annihilation.  I find their responses and arguments unbelievable yet there are millions who believe the unbelievable of the leftist liberal ideology.  America, when did we stop thinking?  America, when did we decide that it is okay to lie, cheat, steal, and commit crimes against the Constitution and ignore the rule of law in politics but unacceptable for the public?  Whenever that was, it was the beginning of our end as the Constitutional Republic our Farmers and Founders established.  The price of that blindness is astronomical.

I find it unbelievable that any would not believe it is good for our economy, the citizens, and the Republic to allow people to keep more of their earnings.  I find it unbelievable that anyone could believe that it is a sustainable situation where the government continues to spend more than it takes in.  I find it unbelievable that anyone could believe that those who do not or will not work are ENTITLED to a portion of what those who will and do work earn.  I find it unimaginable that there would be acceptance of the Leftist argument that it is wrong to deport children but argue that it is okay to abort babies in the womb.  I am concerned that the ideology of the Liberal Leftists Progressive Socialist of today has become so pervasive in the minds of millions they no longer believe in or desire a Sovereign Secure United States of America.  A nation that has no borders is not a nation and without laws, society descends into anarchy.  Are we willing to believe, as those seeking to ban guns, that if the Law Abiding give up their inalienable right to “keep and bear arms” the terrorist, criminals, and deranged will also lay down theirs?  We have cities and states with incredibly strict and restrictive “gun laws” and those places have all seen an increase in gun violence.  In areas where citizens are allowed and even encouraged to exercise the 2nd Amendment Rights gun-related violence has decreased.  Yes, guns kill but only in the hands of someone determined to take another life.  Cars also kill, but not without human involvement.  Medical treatment can kill, but we are not seeking to ban cars, doctors, hospitals, prescription drugs, or swimming pools because there were deaths connected to those places, people, or events.

I believe there has been a significant drift in our “moral moorings” as a nation and a society.  I believe that drift has not been in our best interest.  I am a Christian, yet I do not want any attempt by the government to legislate people’s personal morality.  However, I do want the laws enforced that protect citizens from the morally bankrupt who prey on those citizens and do them harm in any way.  I involve myself in the political because it affects LIFE.  If I ignore the political and allow the continued shift, drift, or evolution of our political climate toward an Oligarchy or Tyranny and turning its back on God and what is morally right, I deserve to suffer the fate of that eventuality.  However, if I warn of the pending danger, sound the alarm and expose the corruption, deception, and lies and move a few hearts and minds to RETURN to our Founding Principles and hopefully to God, my efforts are invaluable.  Therefore, I urge everyone to Pray if you are given to prayer.  I encourage you to become involved in what is happening politically at every level of our society and government because it affects you, your family, and future generations.  I ask that you ask yourself, “Is America to remain the Land of the Free and the Home of the Brave where everyone is created equal and endowed with certain inalienable rights including Life, Liberty, and the pursuit of Happiness?”  If your answer is YES, then your involvement is MANDATORY!