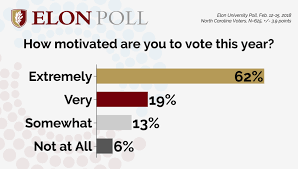 I realize that, in many ways, November seems an eternity away, but it is only 8 short months until American voters will largely decide the direction of this country for the foreseeable future.  Yes, I believe it is that serious and the reason I constantly contend for the Constitution and Conservative values, the values that helped this nation become arguably the greatest on planet earth.  I believed that the 2016 elections were the most critical we had faced in our lifetime and we fought, worked, prayed, and voted as a nation winning a battle which has given us a small window of opportunity.  NOW, we face another battle in this raging war for America and Constitutional Republicanism (Liberty, Freedom, and Limited Government).  What will motivate those on the Left and on the Right to shake off apathy and go to the polls and exercise their constitutional privilege and duty?  What will it take?  What will transpire?  How many of the current hot issues will cool and what new hot issues will surface?

One thing of which I am 100% certain, the Left, the MSM, the Activist promoting the Liberal Leftist Socialist, Globalist Agenda will find something as they attempt to “press people’s buttons” and motivate them.  They will never allow a crisis to go to waste and will politicize anything and everything as they fan the flames of paranoia, fear, distrust, envy, and hate.  I do not give very much credence to the POLLS but sometimes what they are reporting are revealing if not factual.  What are the current issues that are motivating people to go to the polls in the primaries?  A secondary question would be, “Will those issues continue to ignite people in November?”  But, what are the issues that are “hot buttons today?”

Of the many polls out there, many or most are skewed to elicit the response desired to achieve an objective is the USA Today, Suffolk University poll.  It reported that the top issues are immigration, border security, and gun control and the Russian “collusion” is dead last.  If that is true, then why would Mueller and the Democrats keep pressing that issue?  That, I’ve attempted to answer before but let me reiterate IT IS NOT designed to find criminal activity by Donald Trump but to build a dossier that the Democrats could use in attempting to provide a preponderance of evidence to support an attempt to Impeach the President should they regain power.  They fully believe that is going to happen in the November elections and are making plans to oust Donald Trump as early as January 2019.  Will they succeed?  That depends on us, the American voter.

Border Security and Immigration is the top issue for Republicans (17%) making that number one.  In comparison, only 9% of the Democrats view those issues as number one.  That is a bit surprising because of the hoopla that continues to be presented in the MSM and by the Democrats in Washington.  On the other hand, Gun Control is the number one issue for the Democrats (17%) as compared to Republicans (9%).  The third issue that is a “hot button” to voters is TAXES. Nancy Pelosi and the Democrats are incredibly vulnerable on this issue and Queen Nancy’s “crumbs” comments and Senator Chuckie’s declaration of the Un-Americanism of the Tax Cuts leave them open to rejection.  I say that because between now and November millions of Americans are going to realize benefit from the Tax Cuts and that could translate to a loss of votes for the Democrats running on repealing the cuts.  Additionally, the Democrats are running on a platform of Impeach the President and that issue is a virtual non-starter as only 1.4% of voters felt that Impeaching the President was a top issue.  Even more troubling, to me, is the findings of this poll that 75% disapprove of Congress, 48% do not view the Democrats favorably and a whopping 60% have an unfavorable view of the GOP.  It also reported that when asked, “Who would you most likely vote for as a member of the House of Representatives?”  47% of the voters said a Democrat and 32% said a Republican.  That is troubling!

Again, this poll has an agenda and like most polls, I’m confident it is somewhat skewed but the issues that are “hot button” items is interesting.  The economy is not, and I believe that is because the economy is moving in a positive direction.  Political moods are like the weather in Texas, they change daily if not hourly.  What new crisis will surface or be manufactured to motivate voters to go to the polls in November?  I cannot answer that question, but I will predict that the Mueller investigation will have more indictments in September or October to cloud the issue and in the hope of the Democrats motivate their base.  Let me also predict, there will be another mass murder or attempted mass murderous rampage in the Fall to motivate people to become fearful enough they are willing to elect Democrats and give up their right to keep and bear arms.  No, I did not say that the Democrats or governmental agencies will manufacture the event but the political correctness, the indoctrination in academia, the media, Hollywood, and by the activist will allow someone to slip through the cracks and evil perpetuates evil.  Another disgruntled or deranged person with evil in their hearts will seek to make their statement by this kind of horrific evil.  Can we prevent it?  Possibly not, but we can take positive steps to reduce the probability.

Here’s what I want to convey to every person who loves Liberty and wants to maintain America as the Constitutional Republic that our Framers and the Founders established – STAY FOCUSED.  If we grow apathetic or allow our personal distaste for any particular politician to cause us to withhold our ballot in November we will, by that action, allow the Democrats to gain inroads.  If we allow the Left to regain control of one or both Houses of Congress we will have surrendered many if not most of our inalienable rights protected by the Constitution.  We will open the door to the further “fundamental transformation” of our Republic into something other than a Free Nation and expand Government and Governmental Power to the point of no return.  You may or may not like President Donald Trump but surely you like some of if not most of the things accomplished or attempted to be accomplished.  Surely, you want to see the campaign promises kept and the American agenda advanced which would, in some measure, drain the Swamp and dismantle the Deep State.  Surely you want to see government become more limited and control of our healthcare returned to patient and doctor rather than government bureaucrats.  Surely you want to keep more of your hard-earned money rather than giving it to an inefficient bureaucratic government that is incredibly wasteful.  However, if you want to see Government become more and more powerful and are willing to trade your liberties for a false sense of security, then the Democrat pathway is your pathway.  If you want Freedom, Liberty, Limited Government, a Secure Border, a Strong National Defense, and your Constitutional Rights to remain intact, then Defeating the Democrats is your only option.  THAT SHOULD MOTIVATE EVERY PATRIOT!

May God bless you and may He bless America again!