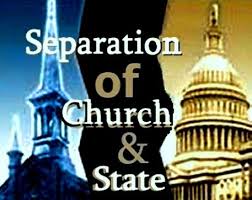 I want to address this issue from a Constitutional perspective and from the Original Intent of the Framers and Founders.  Through the past several decades over 4,000 times the phrase “Separation of Church and State” has been invoked in legal cases.  The flawed understanding of the Original Intent of the Framers of the American Constitution has allowed for removing prayer from schools, invocations at public school sporting events, removing of the Ten Commandments from public or government buildings, and the removal of Nativity scenes from public parks and events.  Beyond that, it has been used to remove or ban several types of popular religious expressions such as “Merry Christmas.”

The Founding Father most associated with the “Separation of Church and State” is none other than Thomas Jefferson.  The phrase is well-known but its history is obscure to most.  Most people today, believe that the Constitution bans all things religious from public buildings, courtrooms, schools, and government.  If we understood the history we would come to a very different understanding of the “Original Intent” and possibly realize the damage we have done to our foundational principles as the Constitutional Republic of our Framers and Founders.

Historically the phrase was introduced in the 1500s by prominent ministers in England was present in the 1600s long before Jefferson uttered any mention of it.  If you go to the Bible, you will find that when God established the nation of Israel, He placed Moses over the civil government and Aaron over the spiritual.  2 Chronicles 26 provides an understanding of how God insisted that the two jurisdictions be kept separate.  King Uzziah’s reign lasted 52 years which was unheard of in that era for a regime to last that long.  Then in verse 16 of that chapter, we find something dramatic happening that changed everything.  The King, unlawfully entered the temple to burn incense on the altar of incense.  He decided that since he was king he had the authority and right to reign over both aspects of government, the civil and the religious.  He crossed the line, a line drawn by God Himself.  The priests in a daring act of courage withstood him but the king used his kingship to overrule them.  It was at that point that God struck him with leprosy and Uzziah fled the temple in horror and humiliation.

This precedent led to heads of State also declaring themselves as heads of the Church as well and the church was “secularized” to the hurt of its purpose and function.  The widespread atrocities that ensued were some of the most horrific in human history, often in the name of the Church and wrongly claiming to be doing God’s bidding and service.  Due to the corruption of the Church’s purpose, we find in the 1500s Bible-based ministers began to stand up to the Crown, often to their own destruction.  It was Englishman Richard Hooker who used the phrase as a call to sanity and order.  King Henry VIII wanted a divorce, but the Church refused to grant one.  The King promptly established his own National Church with him as the head and granted his own divorce.  The English Parliament passed laws as to who could or could not take the sacraments and defined the qualifications for being a minister.

Other ministers joined that cause including Reverend John Greenwood, who pioneered the church attended by many of the Pilgrims when they were still in England.  At that time Queen Elizabeth was head over both the State and the Church, and Greenwood famously declared, “there could be but one head of the church and that head was not the Queen, but Christ.”  He was executed for denying Her Majesty’s ecclesiastical supremacy, simply to the Crown he was a traitor and his acts treasonous.   The Pilgrims fled England to Holland then to America and boldly advocated for “Separation of Church and State.”  They believed, rightly, that the government had no right or authority to “compel religion, to plant churches by power, and to force a submission to ecclesiastical government by laws and penalties.”  Many of the Christian colonists had endured persecution at the hands of State leaders who had commandeered the Church.

In the American colonies ministers such as Roger Williams, John Wise, William Penn and more were strong advocates of “Separation of Church and State.”  In the development of the American colonies, we find that the SEPARATION DOCTRINE was never used to secularize the public square but quite the opposite.  They believed in SEPARATION to protect rather than ban voluntary public religious practices.  Quaker leader, Will Wood declared: “The separation of Church and State does not mean the exclusion of God, righteousness, morality, from the State.”  American Bishop Charles Galloway agreed stating: “The separation of the Church from the State did not mean the severance of the State from God or the nation from Christianity.”  Neither did Thomas Jefferson’s uses of the phrase, “Separation of Church and State.”  His letter where the phrase is used was to the Danbury Baptist: “Believing with you that religion is a matter which lies solely between Man & his God, that he owes account to none other for his faith or his worship, that the legitimate powers of government reach actions only, & not opinions, I contemplate with sovereign reverence that act of the whole American people which declared that their legislature should “make no law respecting an establishment of religion, or prohibiting the free exercise thereof,” thus building a wall of separation between Church & State. Adhering to this expression of the supreme will of the nation in behalf of the rights of conscience, I shall see with sincere satisfaction the progress of those sentiments which tend to restore to man all his natural rights, convinced he has no natural right in opposition to his social duties.”  His argument was that the Government should be prevented from establishing a national church as existed in England and elsewhere.  He was a strong advocate for our inalienable rights not the banning of all things Christian and biblical or religious from the public sector.

Eventually, our Framers and Founders placed within the First Amendment these words: “Congress shall make no law respecting an establishment of religion, or prohibiting the Free Exercise thereof.”   Unfortunately, the first portion called the “Establishment Clause” is used to ban religion from all public or government properties, functions, and agencies.  The “Free Exercise Clause” is largely ignored.  If you read the wording carefully and honestly, you will realize that both clauses were pointed solely and directly at the State, not the Church.  The State is prohibited from enforcing religious conformity, and this amendment also seeks to ensure that the State would protect, not suppress, citizen’s rights of conscience and religious expression.  Jefferson reaffirmed that position repeatedly in his writings.  We have allowed the secularist to steal an inalienable right and foundational principle from us and that has led to much of the difficulty we now face in our America government and society.

I do not expect everyone to agree with me but if we want to see America Restored we MUST return to our founding principles and return to interpreting the Constitution under the light of Original Intent.