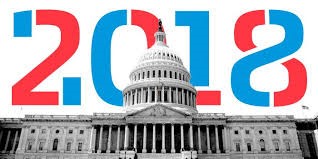 Well, to put it in a ‘nutshell’ EVERYTHING!  But to be more specific, I will list a few things that I am watching intently because I believe, as do many of you, that this election is a window into the future of America, or a crystal ball that reveals America has no future, depending on the outcome or outcomes of various elections.  There have been some things on both sides of the political debate that have caught my attention not the least of which is the Socialist in New York upsetting an Establishment Democrat.  Couple that with some moves I am seeing in California, and the incredibly important races in Texas both for the U.S. Senate and the Governor’s Mansion.    I will go into those issues but let me state at the outset that I see this election as a clear indicator as to what direction my home state and the nation is going to take or has taken.  The elections will define not only the direction we are going to go but the state we have already reached in our moral, social, political, and even spiritual journey.  Will it be a breath of fresh air and provide a new ray of hope or will the dark clouds be revealed and that “Ichabod” has been written over the doorposts?  TIME WILL TELL but until that final vote is counted WE MUST WORK while there are day and hope.

The Bernie Sanders disciple, Alexandria Ocasio-Cortez’s victory over Incumbent Establishment Democrat, Joseph Crowley was a total surprise to me.  I guess that I should not have been surprised because we have been witnessing a shift in the millennials, the openness of Academia, and the fondness of the MSM for Socialism or the Socialism of Bernie Sanders.  The Democratic Party has been transitioning to that position for decades and has now become emboldened to the point they no longer hide from their Socialist ideology and agenda.  That could split the Democrats down the middle but I suggest this is the new face of the Leftist Wing of our Government and had it not been for the dirty dealings of Hillary Clinton and her gang of thugs in the DNC, Bernie would have been the nominee and might have won.  Sometimes, I wonder which would have been worse, Bernie or Hillary and am eternally grateful I can only speculate and do not have to answer that as the result of a real event.

Ms. Oscaio-Cortez wants what Bernie wants and so do most of the Democrats running for office in 2018, including Beto O Rourke (Senate Candidate) and Lupe Valdez (Gubernatorial Candidate) in Texas.  They hide their true colors, some of the time but they are very pro many of the Bernie Sanders Socialist Positions.  They Nationalized Healthcare for all or Obamacare and Socialized medicine.  A healthcare system that has failed here and is failing around the world in the sense of quality and timeliness of care.  They want more federal jobs and even want the federal government to guarantee everyone a job.  I guess we are back to the promise of two-mules and a plot of land or something.  They want free tuition for everyone including illegals. Education is not a Right it is a Privilege and a Prize to be worked for and earned.  Although I believe that most college tuition is overpriced I cannot support FREE TUITION (there is no such thing as a free ride in life) because I know who ultimately pays that bill.  They are for Open Borders and in that believe that the Border Patrol and ICE are virtual terrorist organizations and need to be abolished.  Beto O Rourke even said, “The borders are the safest they have ever been.”  SERIOUSLY?  He knows that is the spin of the Leftist and a total departure from the truth and reality but many believe it.

Ms. Oscaio-Cortez is another of the Leftist who wants “gun control” and so are the two Democrats from Texas.  Mr. O Rourke has claimed to be Pro-Second Amendment but when the Democrats take their position he is standing there with them. Ms. Valdez is a former sheriff of Dallas County and is very Pro-Sanctuary City and opposed to supporting or cooperating with federal authorities dealing with Illegal Immigration.  The two Democrats from Texas are Big Government proponents and desire to weaken the State.  They want to force us to comply with the wishes of various leftist groups whose wishes directly conflicts with our core convictions religiously.  They are all Pro-Abortion even though Mr. O Rourke would like to paint his as a compassionate and reasoned stance.  They are supportive of the DREAM Act and want to provide Amnesty and a Pathway to Citizenship to all who have come here ILLEGALLY.  Mr. O Rourke has called our Border Patrol and ICE a ‘militarization style’ enforcement and wants that to end.  He has called for us to rejoin the ‘Paris Climate Accord’ and appears to be a devoted follower of Al Gore’s Global Warming or Climate Change initiative.

I have not touched on the many claims of those candidates but suffice it to say, they are extremely liberal and follow the prescribed Leftist Socialist Progressive Globalist Agenda of the Democratic Party.  Mr. O Rourke claims that he is only taking money from individuals, not corporations and PACs but who are the individuals contributing to him?  What states and organizations do they represent?  Dig deep and you’ll find that a ton of money is flooding into Texas by Liberal Leftwing Groups trying to unseat Ted Cruz and turn Texas blue.  My concern, at this point, is not that Texas will elect either of those but the margins may be too close for comfort.  Will that signal that Texas is turning purple and becoming bluer or is it a sign that a significant number of people do not like Ted Cruz or Governor Abbott?  Beto O Rourke is somewhat affable and Ted Cruz is far from ‘warm and fuzzy’.  Cruz is often incredibly ‘matter of fact’ and his detailing of issues appears to go over the heads of many who want a more simplified explanation.  That is not likely to change but I pray that my fellow Texans will not take the bait and believe the spin and rhetoric of the Leftists and VOTE NO ON Beto and Lupie and keep Texas Red, Constitutional, and Conservative.  I have no view of what New York will do because New York is New York and even New Yorkers have no idea what New York will do.  Left is Left and it often seems the farther Left one goes in New York, Chicago, or California the better the chances of winning are.

I’m watching the Supreme Court and how the Republicans handle this nomination.  I am watching, the Mueller Investigation and believe that in September or October Mr. Mueller will drop what will be called ‘bombshell’ indictments or allegations in an attempt to sway the outcome of the elections.  I am watching the maneuvering of Congress leading up to the elections to see if the Republicans have any strategic organizational skills and a battle plan designed to protect and defend the Constitution.  I am watching to see if the Democrats will continue to beat dead horses, and take bad positions that backfire on them or if they reorganize and reunite and reignite their voting base.  I am watching the voting irregularities and how many states and districts will open the door for voter fraud and the unqualified and illegals to vote.  I am watching America and believe that this mid-term election, on a national scale, will predict the future of America.

I know what I want and that is the Free Constitutional Republic where the government is Limited, Taxes are Lower, the Borders are Secure, the National Defense Strong, and all men are viewed as ‘created equal with the right to Life, Liberty, and the pursuit of Happiness.”  I long for America to be, “one nation under God.”  I long for us to become ‘indivisible”.  I long for there to be “liberty and justice for all” including the just prosecution of the political elitists in Washington DC, not just partisan coups.  I long for my nation to be restored and return to her moral moorings and I stand for “Faith, Family, and Freedom”.