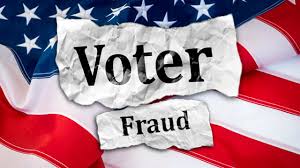 There is never a bad time to discuss the problem of ‘voter fraud’ in America.  I am fully aware that the Democrats keep protesting the charge that there is widespread voter fraud in America.  There have been numerous incidents in Texas and around the country that makes their claim look like protectionism for the illegals voting.  It is not new to this election but appears to be increasing with the knowledge of election officials.  There are laws on the books both State and Federal that make this a felony but those bent on bending the rules and shifting the balance of an election do not seem to mind.  I have said for a long time, laws are made for honest people.  Locks on doors are for honest people because those willing to commit a crime do not care about the law, they are criminals.

In Edinburg, Texas we have been alerted of the arrest of nine individuals who were a part of a fraud ring. They sought to determine the outcome of the municipal election in that city in 2017.  Texas Attorney General Ken Paxton said, “Illegal voting, particularly an organized illegal voting scheme orchestrated by political operatives, is an affront to democracy and results in corruption at the highest level.  Each illegal vote silences the voice of a law-abiding registered voter, my office will continue to do everything in its power to uncover illegal voting schemes and bring to justice those who try to manipulate the outcome of elections in Texas.”  Thank you, Attorney General, something must be done no matter the geographic impact of the tampering.

To date, there have been 14 people accused in that investigation.  In Texas, this is a felony that is punishable but up to twenty years in prison.  In this ring, there were illegals casting ballots.  In North Texas, Tarrant County, four women were indicted for being a part of a “paid voter fraud ring.”  In the Rio Grande Valley area before the 2018 elections the Public Interest Legal Foundation released a complaint to county and state officers regarding “altered” voter registration forms circulated by the Texas Democratic Party directed at noncitizen residents.

In Travis County, Austin, Texas Project Veritas exposed what appears to be a widespread occurrence of noncitizens voting in our elections. This has prompted the Governor and Attorney General to launch an investigation.  The admissions, on tape, by poll works that this not only happened but there were tons of illegals voting in the early voting period is troubling and regardless of whether you are Republican or Democrat you should immediately condemn this practice.

In Florida, the voting irregularities and fraud that have occurred in places like Broward County needs some serious investigation.  A fraudulent vote diminishes the legitimate vote of every registered American citizen.  In 2016, Democratic Rep. Debbie Wasserman Schultz faced a primary challenge by a Bernie Sanders-backed candidate named Tim Canova in Florida’s 23rd District.  Canova sued Broward elections officials and asked to inspect the physical ballots in the race.  Election official Ms. Snipe’s office destroyed the physical originals while saving digital copies as the lawsuit was pending.  That is a violation of a federal statute requiring congressional ballots to be saved for 22 months.  The explanation, just a mistake.

In California, Democratic Bakersfield City Council candidate Gilberto de la Torre was charged with election fraud for his involvement in the 2016 election.  In California the implementation of providing automatic voter registration of motorist who obtain or renew a driver’s license is problematic.  The revelation of several hundred if not thousands of illegals who obtained driver’s licenses were also registered to vote.  Many of the municipalities and even the State has indicated they will count the votes of illegals if cast without consideration of legality.  That is a problem!  In Texas and other States, you can register to vote when you get or renew your license.  Legal status must be part of the process, or we do incredible damage to the integrity of our electoral process.

The Law in Federal Elections is clear.  The National Voter Registration Act of 1993 (NVRA) requires that persons registering to vote in federal elections affirm that they are United States Citizens. Failure to do so is a crime punishable under the following statutes:

Unfortunately, too many officials in various States and municipalities believe that illegals should be able to vote with as much ease and legitimacy as citizens. Twelve States and the District of Columbia allow illegal aliens to obtain a drivers’ license.  Congress attempted to deal with that in 2005 with the Real ID Act but only 24 States are compliant.  The intent of the Real ID Act continues to be thwarted by the NVRA.  The provisions of the NVRA “Motor-Voter Law”, requires state departments of motor vehicles to act as voter registration proxies.  That makes it incredibly easy for noncitizens to both drive legally and vote illegally.

With the estimated illegal population in the United States as being between 11 and 30 million, it is estimated that at least 26 million noncitizens are in this country at any given time.  This has created such an immense problem and the incentive for a noncitizen to vote grows each year.  In East Chicago, Indiana, a city with 30,000 residents, voting fraud was so systemic in 2003 that the State Supreme Court ordered a new election with heightened verification.  When the unlawful voters were prohibited from casting a ballot the outcome of the election changed.

How widespread is the problem?  No one really knows but in 2014 a team of professors from Old Dominion University and George Mason University estimated that approximately 6.4 percent of non-citizens voted in the 2008 presidential election.  They also surmised that 2.2 percent voted in the 2010 mid-term elections.  They also estimated that 80 percent of noncitizens who appeared to have voted cast their ballots in favor of one party, the Democratic Party.  It was believed by these professors that there were enough illegal votes to have affected the outcome.  THAT IS A PROBLEM!

Discount this if you please.  I urge you to pray about it and contact your elected officials asking them to take steps to curb the problem.