There are numerous ways to address this and each of them beneficial in our examination and investigation of the issue.  We are told by the Democrats and some who identify as Republicans that a dealing with illegal immigration definitively and securing the border is demonstrating a lack of compassion and is not what America is all about.  I disagree and believe that failing to deal with the problem and/or securing the border is a lack of compassion, reason, common sense and that failure is not what America is all about.  Let me attempt to highlight my reasoning.

ECONOMICALLY, we cannot afford an “open border.”  The cost is astronomical and growing larger each year and will grow exponentially if we continue this influx of people coming here illegally.  For illustrative purposes, I am going to lump immigrants (legal and illegal) together in calling attention to the economic drain and strain in America.  Thanks to an article by Caroline May we learn that The Center for Immigration Studies of the U.S. Census Bureau has produced some interesting data for consideration about the costs.  We learn from that report that Immigrant-headed households use 41% more federal welfare benefits than native-born Americans.  In 2012, the immigrant-headed household received 33% more cash welfare (SSI and Temporary Assistance for Needy Families), 57% more food assistance (food stamps, the Women, Infants, and Children’s program, and school lunch), and 44% more Medicaid.  The CIS study also reveals that 51% of immigrant-headed households uses at least one welfare program, compared to 30% of native-born headed households.  I hope that disturbs you.  If we keep having more and more immigrants, refugees, and illegals coming into this country it will continue to escalate the cost of the entitlement programs, grow government, increase taxes, and put an unsustainable burden on education, healthcare, and the economy.  CAN WE AFFORD THAT?  I say NO!

Going a step further we find that, on average, immigrant-headed households receive $6,378 per household.  However, those coming from Mexico and Central America received an average of $8,251 per household which is 85% more than the native-born households.  In the report, we learn that immigrants from Europe and South Asia use less than the native-born households, but the more we allow poorly educated and those lacking beneficial skills as well as illegals to flood into this nation the more those costs will escalate.  WE MUST SECURE THE BORDER and WE MUST DEAL WITH THE ILLEGAL IMMIGRATION PROBLEM if for no other reason ECONOMICS.  Economics is a serious part of the equation and with a national debt of over $19 TRILLION, we are on a collision course with bankruptcy and the total collapse of our American economy.  However, economics is only one of the issues that make this a problem of epic proportions and one that is serious enough we cannot afford to continue to kick the can down the road. 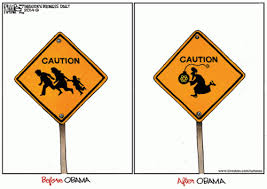 NATIONAL SECURITY, demands that we deal with the problem of ILLEGAL IMMIGRATION and do so immediately and decisively.  Yes, we all want to be compassionate but you cannot allow any to imprison you with faux-guilt at the expense of protecting American citizens and our national sovereignty.  One of the duties of the President is “national defense” and the current president seems to believe that protecting Islamic jihadist and fighting against his perception of Islamophobia is more important than American’s Security and National Defense.  Therefore, the next president cannot be anyone who agrees, even remotely with that philosophy as does Hillary Clinton and Bernie Sanders.  John Kerry is clearly a defender of the Obama Doctrine as is Joe Biden and many of the Democrats in the House and Senate.

An unsecured border opens the door to terrorism on an enormous scale and one that reality no American should be willing to allow.  The Democrats seek to marginalize our concerns and attempt to shame us into submission to the “citizens of the world” mentality that is firmly rooted in the New World Order doctrine and the United Nations Agenda 21 and Sustainable Development Initiative.  If we do not keep America, America securing our borders, dealing with the Illegal Immigrant and out of control spending we will lose this Republic and the “fundamental transformation” of Barack Obama and the Leftist will be complete.  I have one word for that – UNACCEPTABLE!

As we consider the upcoming election for President, Representatives, Senators, Governors, Mayors, and all elected offices, State and Local we should consider how those offices and elections impact our National Security, Economy, and Sovereignty as the Free Constitutional Republic our founders gave us.  THE DECISION IS OURS – – What Will We Decide?