The Constitution of the United States of America is explicit regarding Freedom of Speech.  The exact words are: “Congress shall make no laws respecting an establishment of religion, or prohibiting the free exercise thereof; or abridging the freedom of speech, or of the press; or the right of the people peaceably to assemble, and to petition the government for a redress of grievances.”

I’m not sure what part of this the progressive leftist fail to understand but they clearly do and frequently object to it in its basic premise, foundation, and scope.  I have contended for some time that the religion established by the government has been liberalism, progressivism, and statism.  Those on the left worship at the altar of Cloward-Piven, Saul Alinsky, the Fabian Socialist, Margaret Sanger, and others as they follow a view that is clearly Globalist and rooted in a Socialist, Communist, Marxist, and Elitist ideology.  They believe in Freedom of Religion so long as the prospective religion aligns itself with their philosophy and will succumb to their demands.  Take, for example, the situation in Houston, Texas some time back when certain pastors were ordered to provide copies of their sermon outlines for approval or evaluation by a governmental board to ensure their sermons were in harmony with the Politically Correct, Leftist Ideology.  They were accused of engaging in “Hate Speech” and threatened with incarceration if they failed to comply.  Thankfully, they did not all surrender their 1st Amendment Right and the Courts agreed with them.  That was, in my view, simply a ‘test case’ to see how far the leftist could go giving them information for future infringements.  The argument that the Founding Fathers wanted the banishment of all things religious and biblical from the civil government does not bear up under examination.

I have presented numerous arguments debunking that view, I hate to be redundant and do so again for those who are entrenched in that view will not accept factual evidence.  The clear mandate of the 1st Amendment is that churches and pastors are given liberty for the “free exercise” of their faith including enumerating sins or lifestyles the Bible speaks in condemnation of.  It is not necessarily ‘hate speech’ to do so but an evidence of a shepherd caring for and warning his flock of danger.  I will not argue that a church could not become embroiled in ‘hate speech’ for they could and may seek to incite riots, murder people of differing beliefs, and encourage lawlessness and destruction.  That is not what the 1st Amendment protects, but to disagree with a Politically Correct stance the Liberals have taken on any matter does not constitute ‘hate speech’ and that disagreement is protected by the Constitution and the 1st Amendment. 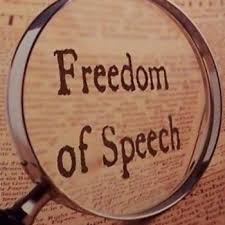 We live in perilous times as the Bible declared would come.  We have come perilously close to losing our Republic and Freedom.  We must work to ensure that no Congress, President, or Court is allowed to infringe on our 1st Amendment Rights.  You have the right to voice your view even if I find your view abhorrent.  No Congress, President, or Court has the power to forbid our freedom of religion or promote one religion over another, as Barack Obama has done in his continual defense of Islam over Christianity.  They have no authority to infringe, suppress, censor, or restrict our Freedom of Speech or Religion. They have no authority to prevent us from the peaceable assembly in protest or request for redress of any grievance.  The key word is ‘peaceable’ and that is not what has happened in the BLM and other extremist actions.

How do we guarantee the Constitution will be followed by the President, Congress, and the Courts?  Short of a rebellion we must do it through the electoral process and through possible boycotts as well as turn up the heat on those elected.  However, as a Christian, I believe that our most powerful weapon is prayer and through prayer and personal involvement we have a hope of turning the tide of the clear assault on our inalienable rights and constitutional guarantees.  That is why VOTING in every election and for every level of Government is imperative.  Not just voting, but voting in a manner to ensure defeat for the ideology that is desirous of stripping us of those rights and freedoms.