The petulance of the Left, largely the millennials who follow their mantra in the so-called demonstrations and protests which are frequently riots is disturbing.  However, the existence of this type of activity is not the major concern, it is the driving force behind it that disturbs me.  This is more than the inability of the fragile to cope with a defeat they were assured could never happen.  It is evidence of a problem much larger and a war much more serious.  If their unhappiness and uneasiness with the results of the election were all that was involved, I would say, “Give it time and it will blow over.”  However, it will not ‘blow over’ because it is part of a much larger issue and war that has been developing and being waged by the Progressive, Leftist, Socialist, and Anti-America factions in this nation and the world.  We are engaged in a very real War for the Republic.

The glaring lack of understanding of Civics or the complete rejection of our founding principles is incredibly disturbing and cannot be overlooked.  This is a War between Republicanism (not the political party) and Mobocracy or as the Leftist would argue Democracy. Our Founding Fathers did not desire that this nation be or ever become a true majority vote Democracy but a Republic or a Constitutional Representative Democracy.  The government they devised embraced principles of Democracy but was never to be a pure Democracy, which in their view was a recipe for destruction and some viewed it as Mobocracy where Anarchy and Tyranny would be the natural byproducts.  They were right!  If we lose sight of what is at stake we will lose our Republic and thereby our Rights, Liberties, and Freedoms.  Those demonstrating and arguing for Pure Democracy would ultimately find what they desired produced their own destruction, but it would be too late to correct the error.

I find it interesting that those protesting the Electoral College have no problem with Proportional Congressional Representation.  The vast, majority of any state might be Liberal or Conservative but have a few Congressional Districts wherein a majority, of voters, opted for a different party or direction.  There are no demonstrations in the streets, riots or protests as a result, so why is there over the election of President?  If we were to adopt a majority vote Democracy the U.S. Senate would be obsolete and completely out of harmony with that view.  How is it that we want equal representation in the Senate and proportional representation in the House of Representatives but are unwilling to allow the collective of states determine the President of the United States of America.  Are the voters of Montana, Idaho, Maine, New Hampshire, Nebraska, Arkansas, Utah, or New Mexico irrelevant?  Are the only voices that matter the voices of the most populace states especially the densely populated regions within various states where there is a super-liberal majority?  If the President is to truly be President of WE THE PEOPLE, then every state must be represented and their decisions respected.  To eliminate the Electoral College process would be to effectively rescind the 10th Amendment and place the Republic in great peril. 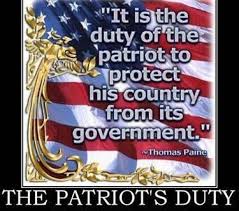 Do we want to so ‘fundamentally transform’ America that we become a nation where emotional, knee-jerk reaction by voters becomes the norm?  Are we going to do away with elected terms of office and whenever there is a groundswell of dissension, hold an election and remove officials or change policy without Congressional and Constitutional processes being followed?  Do we want to allow ‘mobocracy’ to become the norm and whatever the majority wants the majority gets, even if it means trampling on the rights of others in direct violation to God’s moral law and the Constitution?  This is no small matter it is a real War of Republicanism vs Mobocracy.  The Founders wanted to ensure that the rights of the people should not be violated by an unrestrained majority any more than they should be violated by a monarchy or tyrannical government.  Edmund Randolph warned those participating in the Constitutional Convention of 1787 that their responsibility was “to provide a cure for the evils under which the United States labored; that in tracing these evils to their origin every man found it in the turbulence and trials of democracy…”  John Adams revealed an understanding of the dangers of a True Democracy saying, “Democracy never lasts long, it soon wastes, exhausts and murders itself.  There was never a democracy that did not commit suicide.”  Alexander Hamilton echoed those sentiments saying, “We are a Republican Government.  Real liberty is never found in despotism or in the extremes of Democracy.”  James Madison, known as the father of the Constitution argued, “Democracies have ever been spectacles of turbulence and contention; have ever been found incompatible with personal security, or the rights of property, and have in general been as short in their lives as they are violent in their deaths.”   The man known as the Father of the Country and our first president, George Washington, promised to dedicate himself to “the preservation of the Republican model of Government.”

In more modern times Progressives have continually waged war on our understanding of Republican Government and promoted the idea of Democracy.  In the War Department’s Training Manuel No. 2000-25 intended for use in citizenship training identified democracy as: “A government of the masses.  Authority derived through mass meeting or any other form of “direct expression.”  Results in mobocracy.  Attitude toward property is communistic — negating property rights.  Attitude of the law is that the will of the majority shall regulate, whether it be based upon deliberation or governed by passion, prejudice, and impulse, without restraint or regard to consequences.  Results in demagogism, license, agitation, discontent, anarchy.”  This manual also accurately stated that the framers of the Constitution “made a very marked distinction between a republic and a democracy … and said repeatedly and emphatically that they had formed a republic.”  In 1936 Democrat Senator Homer Truett Bone (D-WA) called for the complete repudiation of that document.  In 1952 the U.S. Army was singing the praises of Democracy rather than warning against it.  In Field Manual 21-13, entitled, ‘The Soldier’s Guide’ it stated: “Because the United States is a democracy, the majority of the people decide how our Government will be organized and run…”   The move was clear and forgotten were the warnings of our Founding Fathers and others.  In 1931, England’s Duke of Northumberland published a booklet entitled ‘The History of World Revolution’ in which he stated: “The adoption of Democracy as a form of Government by all European nations is fatal to good government, to liberty, to law and order, to respect for authority, and to religion, and must eventually produce a state of chaos from which a new world tyranny will arise.”  WE HAVE BEEN WARNED but HAVE WE LISTENED?

This is more than a battle between political parties it is a War for Freedom and Republicanism standing against Mobocracy, Anarchy, and Tyranny.  If we allow the Democrats and Progressives to destroy that which our Founders gave us we will effectively destroy America.  You may think it right to argue “one man, one vote” morally right and proper, but if you carefully consider the consequences and the importance of proportional representation by the individual states as a collective you will see the incredible danger that involves.  Benjamin Franklin’s astute and insightful statement resonates powerfully today when asked what kind of government we had, he said, “A Republic, if you can keep it.”  CAN WE KEEP IT?