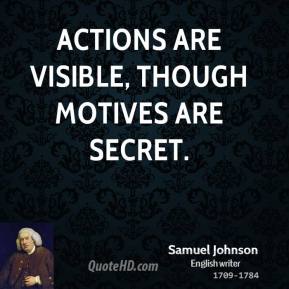 Frequently, I will encounter something and the first thought is, “What is the motive?”  There are times, the motive is incredibly obvious and at other times, it is dubiously vague and difficult to ascertain.  The effect is clear but the reason for the action sometimes opaque.  In life, we are often challenged to determine MOTIVE.  That is not easy in any sphere of life and in politics often opens the door to wrong decisions or reactions and cripples our ability to rightly answer the false ideas that motivated the action.

Among the more recent events that beg for a determination of MOTIVE was the Green Party effort to demand a ‘recount’ in Michigan, Wisconsin, and Pennsylvania.  Jill Stein received less than 1% of the vote, therefore a recount would not affect her standing, so what was the motive?  I cannot definitively answer that, I can only speculate based on information available, words spoken, and participants in the process.  Although she declared that it would be tragic for either Hillary Clinton or Donald Trump to be elected president, she knows that one of them will be the 45th President and the recount won’t change that reality.  Therefore, her suggested MOTIVE of ensuring the election was not fraught with fraud and valid, might be real but highly suspect.  The election officials of those states have declared there is no evidence of hacking or manipulation of machines or ballots, so the question looms large.  Also, why only the states that Donald Trump won narrowly and not include those won narrowly by Hillary?  If you want to ensure that no fraud took place, why not go to California, and seek to verify the voter rolls where it is reported that several million voted illegally?  MOTIVE, in this case, seems to be designed to prevent Donald Trump from becoming the next president or delegitimize his election regardless of the spin they are advancing.  The source of the money and the union of Hillary in the effort suggest my suspicion is correct.

How about the Protests/Riots after the election and the death threats to the designated electors if they vote for Donald Trump?  What’s the MOTIVE behind the protest/riot activities and the death threats?  The rioters/protesters official statement is they are upset with the outcome and their votes had been voided by a corrupt and flawed system rigged against them.  Then, we discovered that a significant portion of those protesting had not even registered to vote!  Imagine that, protesting because their vote, which they did not cast, had been subverted.  I guess they thought that we were using ‘mind-reading ballots’ and the election would be decided on their desire rather than actual votes.  What is the MOTIVE?  With the protests/riots, there is documented evidence that a George Soros backed entity or entities hired some to protest at wages up to $35 per hour.  Not bad work, if you can get it, right?  The MOTIVE might be genuine dissatisfaction but it might also be the work of dire forces ‘unseen’ and ‘unreported’ who want to delegitimize the election of Donald Trump and hamper his administration in its pursuit of the announced agenda and lay the groundwork for impeachment.  It might be that the Democrats, leftist, liberal, and progressives want to create a mentality in the American people that the only legitimate means of electing a president is raw popular vote rather than the proportional system now used in the Electoral College.  It might be rooted in the desire to ‘fundamentally transform’ America and render our Constitution null and void.  It might be something other than genuine angst by those on the losing side of the election.

What about the decision of Barack Obama to order the Border Patrol and I.C.E. to stop surveillance of our borders as his term expires?  What is the MOTIVE of encouraging more and more people to come to America ILLEGALLY?  What is the MOTIVE of those elected officials in cities across America to defend SANCTUARY CITIES where ILLEGALS are given sanctuary even if their history is violent?  What is the MOTIVE of allowing ILLEGAL IMMIGRATION?  Is it purely humanitarian as some on the left proclaim or something quite other than compassion?  If America is important and the Free Constitutional Republican Form of Government valuable, then national sovereignty is vital and to maintain that a secure border is required.  Is the MOTIVE to erase the borders and transform America into a member nation of the World Community where borders are eliminated and everyone is a Citizen of the World without the protection and security of individual national sovereignty?  Is the MOTIVE to develop and solidify a voting base that will assure power to a particular party and ideology into perpetuity?  Is the MOTIVE to allow asylum to those who truly are in danger?  I have a strong opinion but cannot give a 100% definitive answer to the MOTIVE of everyone engaged in this battle.  However, I can say the MOTIVE to have a secure nation should be important and if anyone is truly needing political asylum there are clear means to achieve that, but we dare never lose sight of the danger and fact that coming here ILLEGALLY is a Crime.

What is the MOTIVE for politicians to seek political office?  What is the MOTIVE for the activist to spin their rhetoric, engage in demonstrations, and even commit acts of violence?  What is the MOTIVE for wanting what we want socially, economically, morally, relationally, spiritually, or politically?  I continue to examine my MOTIVES and suggest you do the same.  Most of those who voted NO on Hillary Clinton and YES on Donald Trump had as their MOTIVE a Free Constitutional Republic where the Government would be more limited and less intrusive.  Most were and are fed up with the dirty business of politics as usual and wanted and want REAL CHANGE in Washington where we honor the Constitution and Limit Government.  Will we get that?  I don’t know but I know we would not under a continued Liberal Democrat administration. Therefore, I will pray for my nation and pray that God will prevent the leftist from achieving their goal of stealing the election and fundamentally transforming America!