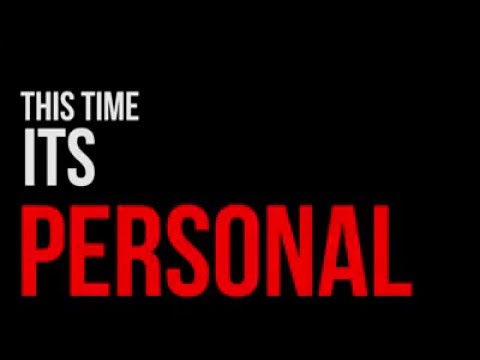 The War on Donald Trump by the Democrats, the Establishment Republicans, the Media, Hollywood, and the Never Trump Crowd is PERSONAL and it is POLITICAL.  I have had people ask, “Why would the Democrats think that by getting rid of Trump they would be in control or have won a great victory?”  The idea is that if they were to somehow oust Donald Trump then Mike Pence would ascend to the presidency and he is a sound conservative, so how would they gain?  They are not thinking about Mike Pence or anyone else they are focused on Donald J. Trump and their intense and burning hate toward him.  IT IS PERSONAL.  He is their mortal enemy.  He is the rain on their parade. He is an interloper, in their minds.  He is not part of the system, did not come up through the ranks, has not paid his political dues, and does not play according to their rules.  He, in their minds, should never have won and now that he has rather than settling in and trying to work together or deal with the loss, they are allowing HATE to prevail and they want His head on a platter regardless of what that costs or does to them or the Republic.  IT IS PERSONAL.

I’ve heard some say that the Democrats and Establishment want to get rid of Trump and Pence so Paul Ryan could become president.  That might be true but for Ryan, the next in line behind Pence to ascend to the presidency Trump and Pence would both have to go before Pence could name a Vice President and that is highly unlikely.  After Ryan would be Orrin Hatch, Rex Tillerson, Steven Mnuchin, James Mattis, and Jeff Sessions.  Going beyond that line of succession would be a virtual waste of time.

If the Democrats believe that Mike Pence, a politician, although conservative would be an easy mark that might be a motivation.  However, I seriously doubt that is their motivation.  I’m sure they believe that Pence would be an easier mark than Trump because of the recent history of Republican politicians.  However, I truly do not believe that the Democrats, Establishment RINO Republicans, Media, Hollywood, or the Never Trump Crowd care about who is next in line they are so filled with resentment toward Donald Trump his ouster is the only objective they can focus on and their ultimate prize.  The Democrats still cannot believe that anyone with no political background and does not follow the rules of the political system could win.  Rather than blaming their flawed candidate, flawed agenda, policy, and ideology they blame us, the Russians, Comey, and whatever else might be available at the moment.  Donald Trump rained on their parade and now flaunts it in their faces and they are furious.  His victory was totally unexpected and impossible to deal with politically so they resort to the emotion of Hate and Hate drives one to seek vengeance and retribution.  Hate clouds sound judgment and express itself, frequently in incredible inconsistency and hypocrisy.

I heard a Democrat say, “This is not personal, but…”  I worked with a guy once and he’d say, “It’s not personal, but…”  His but kept getting in the way and although he may have believed it was just business his but deflated that idea and usually validated the reality that it was personal too.  Maxine Waters said that she believed had Hillary Clinton won she would have fired James Comey but disagreed with Donald Trump firing him.  She even suggested that Comey needed to go but could not bring herself to agree with Donald Trump’s action. WHY?  Because it is PERSONAL as well as POLITICAL.

I know some people who believe, as do I, that Hillary Clinton would have been a nightmare for the Republic and they did not want her elected but they so detested and detest Donald Trump he was unacceptable to them.  Once he won the election rather than accepting the reality that he won the nomination and then the general election and the defeat of Hillary could be viewed a good thing, they continue to seek to discredit and long for the ouster of Donald Trump as president.  WHY?  It is PERSONAL more than it is POLITICAL.  There are things about Donald Trump that trouble me.  I do not like some of his tactics and his brashness, although a breath of fresh air at times he is also over the top as well.  I look at America and considered the options in the November election and decided that the best hope for America was for Trump to win.  I saw no other viable option and did not and do not consider it an abdication of my principles or violation of my integrity to vote for him which was equally a vote against Hillary Clinton.  I have observed President Trump and believe that he listens, unlike Barack Obama or Hillary Clinton.  I believe that he, like most, is sometimes thin-skinned but he, unlike most, seems to have the ability to move past the personal to achieve an objective.  That is probably due to his business background and having to make things BUSINESS before they could be PERSONAL.  Does he hold grudges?  Probably, many do.  Does he have some moral failings?  By my standards, he does but I am not the judge of the universe.  Do I believe that God can use someone who is not wholly righteous and abrasive?  He did in the Bible and has in human history. God sets up kings and takes them down.

When I watch the demonstrations (riots), the incessant attacks of the Media, Comedians, Liberal Talk Shows, Hollywood, and the Democrats I see HATE more than I see any genuine concern for the direction of the country.  Hate is always PERSONAL.  Therefore, without a spiritual awakening or divine intervention, I see nothing changing in those people and the hate is going to grow until it results in something catastrophic and does great harm to the republic.  Among the possible solutions is for us to VOTE OUT the liberal leftist socialist establishment politicians who are unwilling to follow the constitution and accept the peaceful transfer of power.  Another plea is for us to follow the directive of 2 Chronicles 7:14 and PRAY, PRAY, PRAY, with REPENTANCE and RETURN to the Lord.  His promise is that He will hear us and heal our land and we need a healing in America.  I have never witnessed the degree of the division as that which exists in America today and it deeply concerns me.

God, bless you and God bless America.  Lord, we pray for your healing in our nation!