In my opinion was the appointment of H.R. McMaster as his National Security Advisor.  There were significant “red flags” that were raised in my heart when General Flynn was ousted and President Trump named General McMaster to replace him.  What caused “red flags” for me was the fact that the Swamp praised that decision.  The Democrats, the MSM, and many Republicans applauded the decision.  The MSM even said that this decision indicated that Trump knew what he was doing and would move in the right direction.  WOW!  That lasted about 10 seconds but the fact that they said anything like that caused the alarm bells to begin ringing in my head.  Anything that the Democrats, MSM, and the Establishment supports must be examined carefully because they do not support anything that seriously seeks to Drain the Swamp and Limit Government.

General McMaster, among other questionable actions, has promised Susan Rice that she could keep her Top-Secret Security Clearance and that she could continue to have broad access to classified documents.  WHY?  The President questioned her motives for wanting this access but General McMaster went against his boss and the interests of the Constitution and Conservatives and not only allowed her to keep her clearance but claimed it was in the interest of National Security.  This is the same Susan Rice that illegally UNMASKED Americans for political purposes.  General McMaster, whose team are you on?  I suspect it is the Establishment Team that does not desire to advance the Promised Agenda the President and Republicans campaigned on in 2016.  I will attach a copy of his letter at the end of this article but let me address a few things he said in the letter.

He informed Susan Rice that going forward the NSC would continue to work with her to ensure the appropriate security clearance documentation remains on file to allow her access to classified information.  He waived the requirement that she must demonstrate a “need to know” to access any classified information contained in the items she “originated, reviewed, signed, or received while serving” as National Security Advisor.  He said that his decision was consistent with the national security interests of the United States.  Seriously, General, in the interests of the United States.  This woman was part of an administration that did much that was not in the interests of the United States and jeopardized our national security interest.  HOW IN THE NAME OF REASON can you take this action?  If the President fired you immediately it would, in my view, be not only justified but necessary.  President Trump, in my view, made a grave mistake in appointing you.

But, the General did not stop there and he has been cleaning house, not on Obama hold-overs but Trump loyalist.  He is also out of step with the President on the Iran Deal.  He has fired Rich Higgins, Derek Harvey, and Ezra Cohen-Watnick all Pro-Trump individuals and some close to Steve Bannon and Pro-Israel.  He not only has fired Trump loyalist but replaced them with Anti-Trump individuals including Kris Bauman an avowed hater of Israel and a Hamas supporter.  He allows Anti-Israel, Pro-Muslim Brotherhood, and Pro-Iran Obama people like Robert Malley full access to the NSC.  He also left Ben Rhodes and Valerie Jarrett’s people in place.  I don’t know why President Trump appointed him but he did and that was a terrible mistake.  One report I have seen was that President Trump agreed to appoint McMaster to appease people such as Senator John McCain.  McCain, the man that has worked against the President at every turn.  McCain, the man that is so entrenched in the Establishment that he would actively work with the Democrat Leadership and inform them of his vote before casting the NEGATIVE BALLOT but not informing the Republicans.  McCain, the so-called maverick that wanted to be president and is angry with both the current president and the American people.  Mr. President, Fire McMaster and forget about John McCain.  McMaster is either openly or behind the scenes working against everything you stand for regarding National Security and Foreign affairs.  He is the wrong man, in the wrong job at the wrong time if you are going to advance your policies and achieve your agenda items as promised.  You have fired numerous others so why the hold up on this renegade?

You may disagree with me on this point and I do not like the revolving door that appears to have been installed at the White House but this is one firing I believe needs to happen and happen quickly.  Just being a General does not make one qualified as a National Security Advisor and if they are lauded by the Left, the MSM, and the Establishment there is a reason and that reason is they are Swamp Dwellers too. 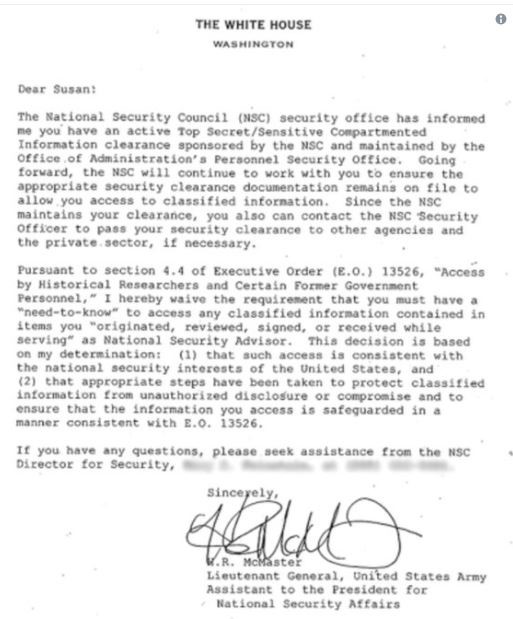