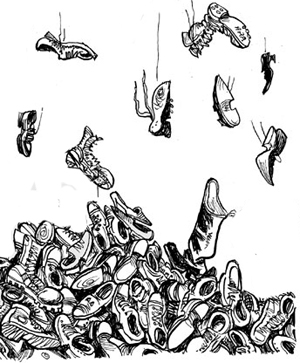 How many shoes have to drop with regard to Hillary Clinton, the DNC, her subordinates and surrogates as well as many within the Obama administration including the one himself?  From the way things look, you could drop a jumbo jet full and still nothing would be done and the spin would keep whirling to protect the Leftist.  Hillary continues to plead the Sgt. Schultz excuse – “I know nothing or I knew nothing.”  Obama knew nothing, Hillary knew nothing, those closest to her knew nothing, the DNC knew nothing, so I guess you can say the Leftist Democrats KNOW NOTHING!  If that is the case, then why would we ever allow them to control anything?  Do we really want people that are so UNAWARE, in charge?  I guess the uranium deal with Russia just happened by spontaneous eruption and the Russian dossier just materialized out of nothingness.  AMAZING!!!

Information keeps being revealed or leaked that links Hillary Clinton and her organization with Russia and attempts to rig the election against Donald Trump.  Imagine that!  Hillary and the Democrats doing that which they are accusing Donald Trump.  Fusion GPS has been accused of being a “Democrat-aligned misinformation firm aligned with Russia.  It has refused to cooperate with Congress in their investigation taking the fifth at every turn.  They have also been accused and suspected of advocating for the interests of corrupt Russian and Venezuelan officials while hiding its foreign work and connections from federal authorities.”  If that is true, then the firm hired by Hillary and the DNC is an Anti-American subversive organization and sheds further light on the depth of debauchery the Leftist are willing to go to achieve their objectives.

The amazing thing is that despite the intensity of efforts by billion-dollar corporations including the MSM, there has not been one verifiable compromising or embarrassing detail of the dossier confirmed.  NOT ONE!  It appears, and I believe is Horse Droppings and almost completely if not completely a figment of their imagination and a concoction designed to dupe the public and provide talking points for the Left.  With all the information coming forth and the revelations of those behind the infamous dossier filled with what can only be called scurrilous and salacious lies about Donald Trump being tied directly to Hillary Clinton’s campaign team and the DNC, there MUST be a Special Investigator.  Not appointing one and the DOJ, FBI, CIA, and Congress doing their due diligence renders all those entities meaningless and political shams not governing and law enforcement agencies and entities.  THEY BECOME A JOKE especially considering the 24/7/365 attacks on Donald Trump.  This is a war and it is more than simply a pitting of those on the Right against those on the Left, it is a Fight for Liberty and Freedom.  The Republic hangs in the balance depending on the outcome of this war.  It is that serious!

As sometimes happens, the worm appears to be turning and the accusers are being exposed as frauds.  The Left thought that this dossier and the War waged by the MSM, Hollywood, ANTIFA, BLM, the Never Trumpers, and others would steamroll Trump and remove him from office or force him to resign.  They are in disarray and dismayed that his approval ratings have been virtually unchanged by their efforts, the economy is rebounding more than at any time under Barack Obama, and the president continues to attempt to fulfill his campaign promises.

It has been reported that the investigation of former Trump campaign manager Paul Manafort was not based on his brief relations with Donald Trump BUT…  Wait for it… BUT based on his lengthy connection to the Democratic Podesta brothers, and the extent to which he may have helped them funnel wealthy and influential Russians into high governmental circles in Washington.  If that is true, that is a BOMBSHELL of such megatonnage it should blow the Democrats out of the water and result in indictments of dozens within the Clinton and Obama teams and probably should include both her Highness and his Highness.  Please understand I do not think them to be regals but refer to what they believe about themselves.

The FBI has documented evidence of outright bribes and there are more revelations coming down the pike.  How high this goes and far-reaching this will be, remains to be revealed.  Will this end the Muller investigation or will Robert Muller do a real job and investigate the collusion by the Clinton team and the DNC, the illegalities of the Obama administration and bring to task those on the Left as well as any on the Right who have broken laws?  I suspect the answer is NO because the team Muller has assembled appears to be nothing more than a Partisan Leftist Gestapo to find and destroy Donald J. Trump and anything or anyone who is a proponent of Originalism in the Constitution.  It is my opinion, that based on the current revelations and the factual information of the FBI covering up illegalities during the Uranium One situation, Mr. Muller should immediately resign and step aside.  His longtime friendship with James Comey is also a disqualifier.  Will he do that?  It is not likely.  Will Hillary and the Democrats admit their collusion and conspiracies?  Not in this lifetime.  Will the public finally wake up and put enough pressure on Congress to end this charade and address the true culprits?  Time will tell.

We are almost at the end of 2017 and the first year of Donald Trump’s presidency.  We are about to enter the mid-term election year and what we do in this coming election will reveal the hope or hopelessness of our Fight for Freedom and the Restoration of the Republic.  The Establishment Republicans who are openly hoping for a Democrat resurgence is not just troubling but incredibly dangerous.  The inability or unwillingness of the GOP to work with this president and advance the agenda of fulfilling the campaign promises is cause for concern.  It is also reason to CLEAN HOUSE in Washington.  We MUST, not simply SHOULD, remove via elections as many on the Right and Left who do not honor the Constitution and truly work in the best interest of America.  2018 is a critical election and we cannot slumber while the foxes raid the henhouses.  WAKE UP!