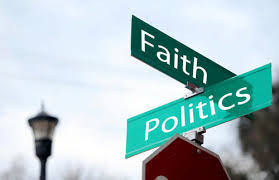 I write this possibly for my benefit alone, but hopefully, it will be of some benefit to others.  Over the past few years, I have been actively engaged in the political discussion as I have watched what I believe is a determined attempt to shift our Republic toward Socialism and Globalism.  I see it as a direct assault on our American Constitution, our inalienable rights including Freedom of Speech, the Right of Self Defense, and even our right to worship freely without governmental restraint or interference.  Some take exception to my being as vocal as I am, and I’ve been told more than once, “Preachers have no business being involved in politics, just preach Christ and leave the politics to the politicians.”  I always respond, “That’s how we got in the mess, leaving politics to politicians.”

I have had preacher friends that I’ve known for many years disassociate with me on Social Media and although most have never told me why I have wondered.  As I have contemplated their possible reasons, I can only conclude that surely it is not my devotionals and biblical posts, for those views are consistent with what I know they have preached and hopefully still preach.  Could it be the humor I have used?  I do not believe they are offended at my use of cartoons and jokes to bring smiles to people’s faces and try to help people make it through the difficult times of life.  However, I have had Christians tell me that I needed to stop telling jokes and be more serious.  After I reviewed the things that I do and post on various Social Media sites I have concluded that the only logical explanation is my involvement in the political discussion.  I know some believe me to be too vocal and others believe that I am mandated by the Bible to NEVER speak negatively about our leaders.  I respect their beliefs but believe that I am mandated by the Bible to warn when I see danger and to identify things in government that violate the very tenets of Scripture and morality.  If you disagree, that is your choice.

As I review history, I find that dating back to the Revolutionary War, preachers in America have been involved in politics and even war.  The Black Robed Regiment of the Revolutionary War identified by the British as BRR for the clergy who took courageous patriotic stances for Freedom.  Those pastors stood boldly in their pulpits and preached LIFE through the Word of God and identified Life as touching everything including the political. They fearlessly spoke of everything from a biblical perspective and encouraged their parishioners to become involved.  From the Revolutionary War to modern day we have had members of the clergy deeply involved and invested in those wars.  Were they wrong to be involved?  Should they have ignored the political, moral, social, economic, and spiritual threats facing the nation and the world and restrained themselves by silence on political matters?  I hope you do not say, YES but are grateful for the courageous members of the clergy who gave themselves to the cause of Life, Liberty, and the opportunity for people to pursue Happiness.

I write this not as in indictment against anyone and will pose my questions in the first person.  If you find it objectionable that I and other ministers are vocal on politics and believe we should be silent, that is your right.  I respect that right.  However, if my involvement offends you because you believe I should not be involved would it be acceptable for me to be offended that you are not?  If I am unkind or cruel in something I say and that is brought to my attention, I take it to prayer and if I was truly unkind or cruel I repent and seek forgiveness of both God and those offended.  However, to simply charge me with bigotry, racism, hate, vitriol, xenophobia, homophobia, or any other phobia because you disagree will not result in me recanting my position.  I know my heart and know that I am none of those things and my purpose is not to inflame or divide but to preserve the Republic and our Freedoms.  I recognize the incredibly wonderful way the gospel of our Lord Jesus can be sent around the world from a Free America.  I realize how much more difficult it would be if we were to succumb to the intent and agenda of those who would ‘fundamentally transform’ America, restricting our Freedom of Speech, and placing restrictions on Christians and ministers to preach, teach, and live according to their faith.

I am concerned for America.  I am concerned that we who are members of the clergy have allowed ourselves to be censored and silenced when we should have been vocal.  We have allowed the educational system which is largely controlled by the government to shape the views of our children.  The fruit of several generations of that abdication by parents and the church has produced a Progressive, Liberal, mindset that embraces Socialism, Abortion, and Self dangerously.  I am no longer a pastor in a local congregation but believe that any influence I might have on others I must cautiously and carefully guard and seek to lead in right paths.  My first love is God and in loving God I want to see people (all people) FREE.  I use the platforms available to me to proclaim TRUTH.  You may believe that I am wrong in what I believe and that is your right.  I try to formulate my opinions based on the Whole of Scripture and the Teachings of our Lord Jesus Christ.  I still preach and teach the gospel message to churches whenever possible and as the door opens.  I still witness and share my faith with those in the public, in homes, hospitals, etc.  I still pray for the Lost and the Harvest to have laborers sent into it and pray that none be lost.  That is a passion of my heart to see the believers equipped for the work of ministry and the lost come to salvation.  THAT WILL NEVER CHANGE!

Yet, in doing what I believe God has called me to do, I must WATCH and PRAY.  I believe I am mandated by Scripture and the Lord to “Sound the Alarm” when I see danger.  In that calling, there is of necessity the calling out of wrong politics and policies. I do not compare myself to the disciples of the New Testament who stood before religious and political authorities and declared, “Whom shall we obey, God or man?” but I believe that I am under the same directive.  Therefore, if my being vocal on politics is not something you can tolerate I understand.  I ask that you pray for me in the ministry I have been given and I will pray for you in yours.  I love God, America, my Family, and my Freedom.  I love you!